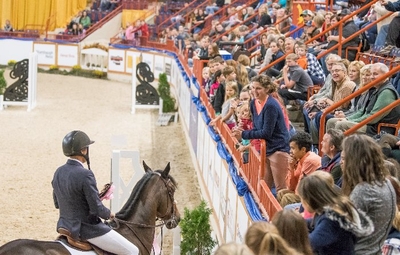 Pa. Naional H.S. (Photo by Brittany Oliver)Historically held in one competition ring, the PNHS will now make use of two show rings and two schooling areas at the Pennsylvania Farm Show Complex in Harrisburg, allowing for additional opportunities for all competitors.

Included in the new additions are full divisions for children’s and adult hunter and jumper competitors and $10,000 classics for the children’s hunters, adult hunters, children’s jumpers, adult jumpers and the low junior/amateur-owner jumpers.

Age-group equitation warm-up classes have also been added to give equitation competitors a chance to contest an additional judged equitation course prior to the Hunter Seat Medal Final and in addition to the usual allotted warm-up round.

FULL SPECIFICATIONS of the newly added classes will be released in the coming weeks, to coincide with the opening of entries and the official prize list release.

The show will now make use of two show rings and two schooling areas.

For hunter competitors, riders will be vying for increased prize money, with more money offered in the junior and pony hunter divisions than ever before.

“We welcomed Pat Boyle as our new competition manager earlier this year, and we’ve been working very closely with him to implement a number of exciting new changes and additions – all while being cognizant of preserving the tradition and history that the PNHS has become known for,” said Susie Shirk, executive director of the PNHS.

In the hunter divisions, riders will be competing for increased prize money, with more money offered in the junior and pony hunter divisions than ever before. Highlights include:

The former small warm-up ring, located before the entrance to the main competition arena, will be expanded and revamped for 2021.

This change was made to create the opportunity for additional competitors and to ensure the financial viability of the horse show for many years to come.

Highlights of the week’s open jumper and 1.30m jumper competition will include:

“Hosting FEI-sanctioned competition presents a considerable expense, and particularly following the modified 2020 show, we want to ensure the financial success of the Pa. National for 75 plus more years to come,” said Shirk. “By instead offering USEF National Standard competition this year, we are able to reduce expenses while continuing to give spectators a great show. We are excited to offer these classes to those individuals not having the opportunity to compete at Harrisburg in the past.”

In that same vein, the PNHS team has introduced several new initiatives to welcome increased spectators to the 10-day horse show, including offering free admission for the majority of the event.

“Our hope is to fill the stands with not only exhibitors and the local equestrian community, but also those who may be experiencing the thrill of show jumping for the very first time,” said Shirk.

All attendees will also be welcomed to shop an all-new trade fair.

With the majority of vendors to now be centrally located in one exposition hall, shoppers of all interests and equestrians of all disciplines will be welcomed in to shop, creating a new experience at the horse show, as well as an added benefit for PNHS vendors.

The introduction of the new trade fair and the move of the vendors to a new central location will also allow for increased schooling space for competitors.

A formally small warm-up ring before the entrance to the main competition arena will now be transformed and greatly expanded.

“We’re going to be taking the previously small schooling ring and expanding it to fill much of the hall that it’s in,” said Boyle. “Not only that, we’ll be adding bistro tables and a small bar in the corner of the area to really create an even better atmosphere for the horses, riders and all of those shopping in our new vendor area.”

To learn more about the 75th-anniversary edition of the Pennsylvania National Horse Show, visit www.panational.org.