LAUREL, Md.--Even if horses can return to train at Laurel in August, there won't be any racing there any time soon, which continues to be an ongoing problem for Maryland trainers. 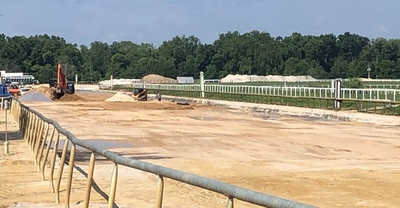 Laurel trackMaryland Jockey Club and its parent company, 1/ST RACING (The Stronach Group), is hopeful horses will be able to return to Laurel Park the first week in August barring any delays in the ongoing renovation of the dirt surface, but even if they do, racing will likely continue at Pimlico Race Course in August until the Maryland State Fair at Timonium meet begins.

An update on the project and a timeline were discussed June 14 during a Zoom community meeting hosted by the Maryland Thoroughbred Horsemen’s Association.

IT WAS ALSO announced that the Maryland Racing Commission had granted an extension of racing at Pimlico, if needed, through the end of what would have been the Laurel summer meet on Aug. 22.

That depends on the weather, the supply chain for product, and material specifications, among other things.

“As most people are aware, things haven’t gone as smoothly as possible,” Butler said. “The base is in worse shape than we anticipated but we are dedicated to doing this project right without cutting corners.”

Dennis Moore, the TSG Senior Track Superintendent who has been working on the Laurel Park project, said a French drainage system on the backstretch had been plugged up, which led to soft spots on a regular basis.

In addition, there are issues with the grading of the surface in multiple locations.

“The recent rain has set us back a few days but we’re moving forward,” Moore said. “We are trying to get it done by the first or second of August.”

In response to questions, TSG officials said the entire base of the dirt surface at Laurel—from the inside rail to the outside rail—will be replaced.

In the future, when the Racing and Community Development Act project begins, parts of the base will need to be re-examined, they said.

“The biggest area of concern is the backstretch, where we did extensive digs about 2 1/2 feet down,” Moore said. “I think when we get done we will have a very safe, uniform and consistent surface.”

Regarding relocated backstretch workers who have hotel rooms near Timonium or dormitory rooms on the property, adequate capacity for the workforce will continue on an as-needed basis.

Meanwhile, the MJC has arranged for regular repair work, as well as other projects, at Laurel during the down time there.

TSG Senior Vice President of Racing Steve Koch said boards have been replaced in roughly eight barns; the interior of barns are being painted; and Orkin, hired for rodent remediation, continues a full-court press in the barn area.

“We’re taking every advantage of not having horses in the stalls,” Koch said.