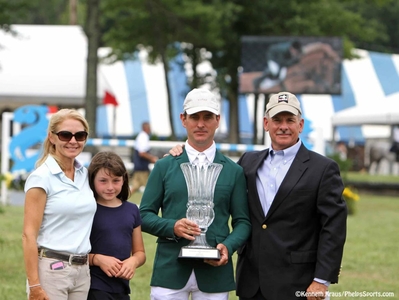 Kevin Babington, center, prior to his accident, with Diana, left ,accepts a trophy from Jeff Papows, right, at Silver OakThis past season, The World Equestrian Centers, Traverse City Horse Shows, The WEF, The National Horse show and Split Rock have all become involved in different ways at different times to support Babington.

Not only has it made the cost of therapy more manageable, but it has also allowed Babington's family to stay involved in the Sport which is very important to him.

Babington has made progress physically and is teaching, and he is living in rehab with every spare minute; and at the same time, never complaining.

We are amazed at his patience and tenacity.

This season The Silver Oak Jumper Tournament and The Traverse City Horse Shows will again hold “The 1.25m Open Babington Benefit Classic” the week of Silver Oak this September with the entry fees going directly to support Babington.

SILVER OAK was an enormous hit last year and fittingly won by a friend of Babington’s, Paddy McNamara,to everyone’s delight.

“Lake Placid, The Hampton Classic, The World Equestrian Center and others are once again collaborating in much the same way and we are so proud of our Sport,” said Jeff Papows, SOJT Founder and Chairman. “Each Show will announce their own programs, but we have again circled the wagons.”

The Irish contingent, Shane Sweetman, Darragh Kenny, Alan Griffin, Paul O’Shea and others have all added their voice and have been so kind and supportive of Silver Oak and our efforts to spearhead this work, said Papows..

“Silver Oak and Jeff have been central and it’s indicative of their love of the Sport and charitable work for horse and K9 rescue, and we all appreciate that leadership”, said Shane Sweetman, Darragh Kenny, Paul O’Shea, and Alan Griffin.

We challenge other shows to pick up the mantle and get involved.

Please feel free to contact This email address is being protected from spambots. You need JavaScript enabled to view it. for help and coordination.

As a reminder to all Competitors, please ask each show you attend to get involved to support Kevin.