LEXINGTON, Ky.--US Equestrian announced the 12 riders who have been selected to the U.S. Dressage Olympic Short List. 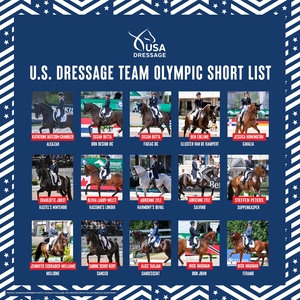 The total of 15 rider/horse combinations are in consideration for the three team spots and one traveling reserve for the Tokyo 2020 Olympic Games this summer.

The following riders and horses have been selected to the U.S. Dressage Team Olympic Short List and are listed in alphabetical order:

US Dressage Team Short List for the 2020 Tokyo Olympics

Jessica Howington of Wellington, Fla., and Cavalia, her own 2007 KWPN mare

Alice Tarjan of Oldwick, N.J., and Candescent, her own 2010 Hanoverian mare

Riders and horses will compete in the U.S. Dressage Short List Mandatory Observation Event at the Palm Beach International Equestrian Center in Wellington, Fla., from June 8-12.

Additional information including live streaming details, spectator attendance, and VIP availability for the Mandatory Observation Event will be announced in the next few weeks.

The final team selection will be announced by June 21, 2021.

All nominations to the U.S. Olympic Team are subject to approval by the United States Olympic & Paralympic Committee.