No herpes at the World Equestrian Center in Ocala, but Laurel Park racetrack remains under lockdown due to herpes

OCALA, Fla.--Good news from Ocala as the horse sent to the University of Florida tested negative for equine herpesvirus type 1 (EHV-1), but a bit of worrisome news from a couple of racetracks as racing was cancelled for one day, Friday, March 12, at Laurel due to the herpes lockdown and two barns were quarantined at Gulfstream after a horse died from an unknown cause there Tuesday night, March 9, although it would seem that death might easily have been caused by the filly's having gotten loose at the track earlier that day. 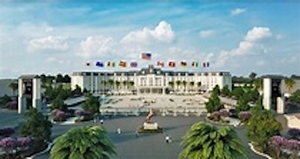 Based on the negative test result, the State of Florida and WEC veterinarians and management lifted the quarantine on the 16 horses currently stabled in Barn D, and horse showing will continue as scheduled.

As of March 10, no horses have tested positive for EHV-1 on WEC property.

However, horses that have travelled to another Florida competition venue and horses who have been exposed to horses that have been at other Florida competition venues in the last 10 days will not be allowed on WEC show grounds, and all horses entering the property must present a health certificate or statement of health from a licensed veterinarian issued within seven days of travel.

LAUREL Park continues to face lock downs due to EHV-1.

The Maryland track cancelled Friday's nine-race program as a number of horses entered on the March 12 card are now under quarantine.

The Maryland Jockey Club will try to have the remaining horses, the ones that aren't under quarantine, from Friday's program fill cards on Saturday and Sunday.

AT GULFSTREAM, two barns have been quarantined  after a horse died from an unknown cause Tuesday night at the track, according to Dionne Benson, the Chief Veterinary Officer for The Stronach Group, who said that the quarantine would prompt a number of scratches on today's card.

The news was first reported by Daily Racing Form's Mike Welsch in a Tweet and reported in the Thoroughbred Daily News.

Dr. Benson said that the filly had gotten loose on the track yesterday morning, and run back to the barn area, entering a barn that was not hers.

She was walked back to her barn, and was discovered down in her stall last night by a security guard.

“We got several stories about the horse and the reason for the death,” said Benson. “It could very well be related to a trauma issue. Out of an abundance of caution because we didn't get the full story, we contacted the state vet and were instructed to quarantine the two barns the horse had been in. We have sent the horse for a necropsy and will have the results laterWednesday, March 10.”

Dr. Benson said that there was currently no indication that the case was related to the recent outbreak of equine herpesvirus type 1 (EHV-1) at Laurel Park, also a Stronach Group track.

“This was done in the consideration of safety for the horse and welfare for the entire horse population,” she said. “We did not see the incident. It was not reported to us earlier in the day.”

She said that additional precautions were being taken at Gulfstream because of an outbreak of EHV-1 in the show horse population near Ocala.

“We previously had dialed back our health certificate requirements from 72 hours to 24 hours,” said Benson, explaining that horses arriving at the track must now have been seen and certified as healthy within 24 hours before arrival, while the typical window is 72 hours. “So that gives us an extra added protection of those two days.”