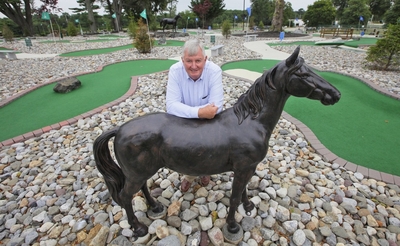 No cause of death was given.

Born in Maryland, Forbes spent his entire career in the racing industry, following his parents into the profession.

He moved his operations to New Jersey in the late 1970s and remained a Garden State mainstay.

“John was New Jersey racing,” said Dennis Drazin, chairman and CEO of Darby Development LLC, operators of Monmouth Park Racetrack. “He was a tireless advocate for the industry, for the horsemen and for Monmouth Park.”

Among Forbes’ long list of accomplished runners were graded stakes winners Peanut Butter Onit, Pukka Princess, Jess C’s Whirl, Boyce, Amarillo, Get Serious and Tale of the Cat, who went on to be a leading sire.

Forbes gave up training on a daily basis in 2012.

HIS ASSISTANT, Pat McBurney, took over his horses.

“John and I spent decades together experiencing all the highs and lows that this business has to offer,” McBurney said. “It was always a team effort with John.

“Even after he stopped training on a day-to-day basis he was equally involved as an owner, adviser and most importantly a friend. It’s hard to imagine Monmouth Park without John, but Monmouth Park will forever be better because of John.”

Born to a family of horsemen, John was the consummate horseman.

He was devoted to the horse, the industry and its people.

He was never satisfied with the status quo.

He demanded of the industry that which he expected of himself—honesty, integrity, hard work and an unrelenting determination to protect the health, safety and welfare of the horse, the integrity of our sport and the welfare of those who worked on the backstretch.

He was a generous, compassionate and decent man, beloved and respected by everyone who knew and worked with him.

In 1987, John asked his friend Alan Foreman to help form a new horsemen’s organization that would be progressive and strengthen the voice of horsemen in the industry.

Rick Violette joined the effort thereafter and the THA was born.

But for John, there would not be a THA, and the record of the THA’s impact on the industry can easily be measured since that time.

There is not an issue involving the health, safety and welfare of the horse and the integrity of our sport that doesn’t have John’s fingerprints on it.

In recognition of his lifetime of service to horsemen, the industry and the THA, he was honored him with the President’s Award in 2018.

Just as important, John was a giant in New Jersey racing.

He loved Monmouth Park and was devoted to its survival and success.

He was New Jersey’s greatest trainer, and when he retired from training, did what he could to ensure Monmouth’s survival, including constructing and operating a world-renowned miniature golf course on the property that hosted two US Opens and earned him a spot in the Pro Mini Golf Hall of Fame.

It's fair to say that but for John Forbes, there would be no Thoroughbred racing industry in New Jersey.

Services will not be held because of the pandemic.