UNIONVILLE, Pa.--When your parents are accomplished trainers, racing is literally, figuratively, and undeniably in your blood. 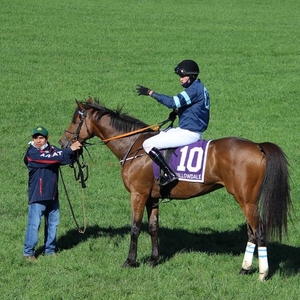 McLane Hendriks on Officer Sydney (Photo by Tod Marks)So there really was little doubt from day one that McLane Hendriks was destined for a career at the track in one capacity or another.

At 29, McLane already has been in riding competitively for 20 years, his first mount coming at age nine aboard a horse named Angel in Disguise in a pony race at the Pennsylvania Hunt Cup.

He continued to gain experience -- and learn the trade from his mom and dad, Liz Merryman and Ricky Hendriks -- in pony races, junior horse races, and field master chases until he was 16.

In 2007, McLane received the Jonathan Kiser Memorial Scholarship, selected by the Maryland Steeplechase Association board and awarded to a junior rider in recognition of sportsmanship, horsemanship, talent, and dedication to the sport.

“It was a great experience working for Mr. Voss,” McLane said. “I rode out and groomed, I learned how to judge pace there with the help of Cyril Murphy, who was his stable jockey at the time.”

For the past seven seasons, McLane has ridden as an amateur in 62 NSA sanctioned races, winning seven times, with seven seconds and six thirds.

HIS INITIAL victory came aboard Armata Stable’s Embarrassed at the 2015 Winterthur Point to Point.

But McLane always kept a clear eye toward the future, preparing for life beyond the saddle.

McLane graduated with a bachelor’s degree in animal science from the University of Arizona racetrack industries program.

With his background, McLane said, “I would love to get involved with NSA video production and/or Fair Hill! My senior thesis was a study on Fair Hill and how to grow the sport through that meet with wagering/simulcast and evening racing.”

After school, McLane earned his license as a commercial real estate agent and, for the past three years has worked at Patterson-Woods in Wilmington, Del., all the while riding in the mornings and helping out at his dad’s powerhouse stable in Unionville, Pa.

As the 2021 steeplechase season takes shape, McLane is focused on a new challenge.

He’s taking a break from real estate to apply for his trainer’s license.

McLane already has a timber horse under his care -- optimistically named Alert ‘n Ready -- for a partnership he’s put together.

If all goes well, the horse will run this spring.

That doesn’t mean McLane has given up his jockey ambitions.

And, of course, getting a leg up some of his dad’s timber runners including Officer Sydney, Cheers to Us, and Pincer Movement along with young flat runners transitioning to hurdles: Supervillain, Magic Wizard, and Better Tapit.

Looking back at 2020, it started off memorably enough with his first visit to the Cheltenham Festival in England in March.

But when McLane returned stateside, the pandemic had begun to cast its dark shadow, wreaking havoc with the NSA spring schedule.

McLane had only one mount during the severely truncated calendar, and it was both encouraging and frustrating.

Partnered with Armata Stable’s Zanzi Win, the pair finished second on the flat at Middleburg in June, but unfortunately, horse and rider were disqualified for going off course early in the going.

During the fall, McLane was lucky enough to climb aboard G1 winner Surprising Soul at a few point to points.

Owned by his grandmother, Wendy Hendriks, and trained by his dad, the duo teamed up for a win at Old Dominion.

But the best was yet to come with some dazzling moments on two other horses owned and trained by his family.

McLane had the winning mount at Virginia Fall in Middleburg on Cheers to Us, in a timber allowance for apprentice riders.

One week later, he was aboard Officer Sydney to capture the inaugural running of the Louis “Paddy” Neilson III timber allowance at Willowdale.

After parting ways with Officer Sydney in the Virginia Gold Cup, the two finished the year on a high note with another score over timber at Callaway Gardens in Georgia.

The win, McLane’s third sanctioned victory of the season, put him atop the standings for apprentice jockeys.

“My season had a lot of ups and downs,” McLane said. “I count my losses or mistakes along with the wins. A fellow jockey and friend, Darren Nagle, put it to me. ‘My form looks like Moscow Flyer (a legendary European chaser trained by Jessica Harrington). I either win or fall.’

“This season was special, though, because my highlights are on my grandmother’s horse trained by my dad. I had opportunities to ride some really incredible horses.”