New York-bred Tiz the Law, trained by ex-steeplechase jockey Barclay Tagg, was nominated for the Three-Year-Old Male Eclipse Award after winning four stakes in a row, including the G3 Holy Bull and the G1 Florida Derby, both at Gulfstream, the G1 Belmont Stakes at Belmont and the G1 Travers at Saratoga. 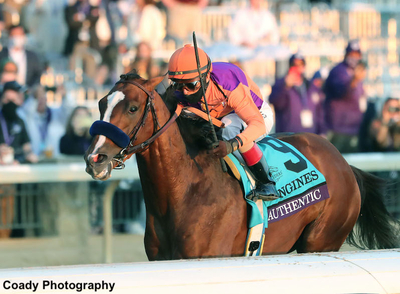 Authentic winning the Breeders Cup Classic (Photo by Coady)But he was beaten by Authentic  in both the G1 Kentucky Derby and the G1 Breeders Cup Classic, and Authentic is also nominated for Three-Year-Old Male as well as Horse of the Year, so it seems unlikely that he will win despite his outstanding year.

Tagg is one of a number of ex-steeplechase jockeys who have gone to to be top trainers.

Meanwhile Graham Motion, Bernie Houghton and Rodney Jenkins have been scoring wins, one of which is owned by a former member of the Pennsylvania Horse Breeders Association Board of Directors.

Barr is a former member of the PHBA board and has worked hard for racing in the state.

Authentic won five stakes in 2020, including the G3 Sham and the G2 San Felipe at Santa Anita, the G1 Haskell at Monmouth, the G1 Kentucky Derby at Churchill Downs and the G1 Breeders Cup Classic at Keenelnad, but he was second in the G1 Santa Anita Derby and in the G1 Preakness at Pimlico.

Monomoy Girl was undefeated in 2020 with four wins, in an Allowance race at Churchill, the G2 Ruffian at Belmont , the G1 La Troienne and a second win in the G1 Breeders Cup Distaff at Keeneland, having won that previously at Churchill in 2018 and then taking a year off,

Improbable won three G1 stakes but then was second yo Authentic in the Breeders Cup Classic.

Winners in 17 horse and human categories will be announced during a virtual ceremony of the 50th annual Eclipse Awards on Thursday, Jan. 28 at 8 p.m. ET.

Of the 249 eligible voters represented by the NTRA, consisting of member racetrack racing officials and Equibase field personnel, the NTWAB, and Daily Racing Form, 238 (95.58 percent) took part in the voting.

Finalists were determined in each category by voters' top three selections, using a 10-5-1 point basis, and Eclipse Award winners are determined solely by first-place votes.

The 2020 Eclipse Awards finalists (in alphabetical order) are:

The Eclipse Awards are named after the great 18th-century racehorse and foundation sire Eclipse, who began racing at 5 and was undefeated in 18 starts, including eight walkovers.

Eclipse sired the winners of 344 races, including three Epsom Derbies