ELKTON, Md.--Emery Jones Taylor and Harper McVey, both local and both with decades of equestrian experience, are new staffers at the National Steeplechase Association, replacing recently retired Pete McGivney and Nancy Dougherty. 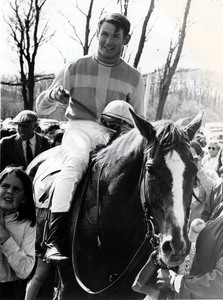 She will initially assume the title of Business Administrator, focusing on financial affairs and replaces General Manager Pete McGivney, who retired in early January after 30 years on the job.

Taylor is the daughter of well-known horseman, breeder, bloodstock agent, and race official Russell Jones of Unionville, Pa., former owner of Walnut Green, the Pennsylvania-based purchasing and sales consignment company he co-founded in the 1970s with his brother Richard.

She is married to Josh Taylor, owner of Midlantic Ltd, a promotional marketing company in Kennett Square, Pa.

Taylor grew up riding in pony races, galloping her parents’ jumpers, and fox hunting, and, among her many jobs in the industry, she served as farm manager at Walnut Green as well as George Strawbridge’s Augustin Stable.

She said she hopes to use her experience to help make the organization more flexible, and quick to adapt and respond.

HARPER McVEY brings a different skill set to the NSA team during this time of transition.

McVey is holding the shank of Erdenheim Farm's Sangria, with Dr. Fisher and jockey Rick Wilson, after a win in the G3 Violet Handicap at The Meadowlands in 1997. (Photo by Equi-Photo)A recent graduate of Pratt Institute in Brooklyn, N.Y., where she earned a bachelor of fine arts degree in communications design with a focus in advertising and art direction, Harper additionally brings a wealth of computer know-how.

Her initial title will be Assistant to the Director of Racing, participating in various tasks from licensing to racing operations and officiating.

Harper, who currently resides in Hockessin, Del., will fill the opening created by the retirement of Nancy Dougherty, who had been the Executive Secretary of the NSA for 25 years after an established career at the duPont Company in Wilmington, Del.

An avid equestrian since childhood, Harper worked at trainer Tom Proctor’s barn at Fair Hill, Md., and has owned and retrained off-the-track thoroughbreds for new careers.

“Both of my parents worked in the Thoroughbred industry and have friends and connections in the steeplechasing world, so I grew up heavily immersed in horse racing,” she said. “While in college, I was able to combine my passion for racing with art and design.”

The hires come at a time of change for the governing body of U.S. steeplechasing, much of it wrought by the challenges of Covid-19.

Director of Racing Bill Gallo said the NSA Board of Directors is focused on making the organization more efficient, tech savvy, and up to date.

As part of the metamorphosis, its three staff members will be redefining their traditional job descriptions, sharing more duties and working more collaboratively than independently.

“It’s a work in progress,” Gallo said. “We don’t want any one person responsible for any one thing. We want to work hand in hand and have any one of us be able to step up and step in, as necessary.”

Taylor and McVey are planning to be on site at many of the local race meets this spring to begin to introduce themselves to the steeplechase community.