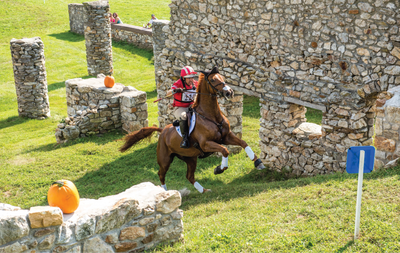 Due to the increased, and very unpleasant, nastiness of letters condeming those in the Eventing world who support Plantation Field, The Horse will no longer run Letters to the Editor on that subject.

The Horse ran a Letter to the Editor from a source whose name is known to The Horse who wished to sign the letter as "A troubled member of the area II eventing community" because of that nastiness.

The Horse published that letter because it felt that Eventers should know the background of the Editor of Eventing Nation, which single-handedly caused the demise of one of the greatest Evening venues in this country.

The Horse received two letters, one of which the writer asked not be published, complaining about the "character-assassinating letter regarding Leslie Wylie."

IT IS NOT character assassination to reveal a factually true background that included two traffic accidents, one of which included a fatality that was caused by her fear of needles after undergoing an ELECTIVE Botox operation on her face.

Eventers should know the character of this Editor, and that letter showed it.

The nastiness and attacks on some of Evening's top riders seen on social media is a very disturbing look into some people's attitude towards Political Correctness and their defense of it by attacking anyone who dares go against it by calling them racist when there is absolutely no racism involved.

It was sad that the dispute was passed on to the New York times, thereby forever implanting in the minds of some that Evening is associated with racism, which is entirely untrue - Eventing has always been open to all races.

Will Driving insist Charlotte Weber change the name of her property?

Morven Park was worked by slaves, a much closer association with slavery than Plantation Field, which was named for trees planted on the property - the correct Dictionary use of the name.

Will Eventing allow competitions to continue to be held at Morven Park?

So far the USEF has remained silent on this dilemma, and it would be nice to see some leadership from that quarter.