KENNETT SQUARE, Pa.--New steeplechase fences, named Easyfix Fences, have been designed to replace the current National fences in use at all steeplechase meets and are available for trainers to school over at Wilowdate in Kennett Square and at Shawan Downs in Maryland and at Doug Fout's in Virginia 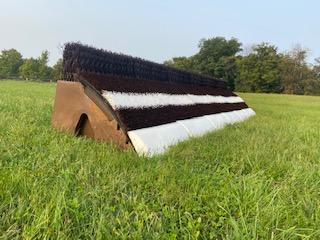 The fences, designed with the input of the National Steeplechase Association's Safety Committee and NSA horsemen, arrived in the U.S. two weeks ago and have been distributed to those three locations in the mid-Atlantic, to give NSA horsemen an opportunity to school for free over the fences this fall.

The Easyfix Fences will not be used in NSA sanctioned races this fall, but will be used in the spring for some races.

Three of trainer Jonathan Sheppard's horses were schooled over those fences on Oct. 5.

"The fences were fine," said assistant trainer Keri Brion, who supervised the school. "They're bigger than our hurdles, and there's a little less room for error."

"WE SCHOOLED two horses we imported from Ireland who ran over fences like those in point-to-points over there and Iranistan, who's a very experienced jumper," said Brio. "I wouldn't want to school any young or green horses over them until this season is over while those horses are still looking at racing over our National fences this fall."

"They're trying to better the sport, so we have to give them a try," said Brion.

Appointments must be made for schooling and releases must be signed, and all schooling details can be found on the Temple Gwathmey Steeplechase Foundation.

TGSF would like to thank Willowdale Steeplechase; Leslie Young and Jonathan Sheppard's crews for assisting in the set-up there and Shawan Downs and Doug Fout.

The National Fence has been used as the standard Fence here in the USA since 1972 (nearly 50 years) with little or no change to the Fence other than adding ground and “knee” lines.

The National Fence been has been fully studied in a multi-year review process from the NSA Safety Committee, headed by Reynolds Cowles, DVM.

The Safety Committee has kept detailed statistics on yearly fatalities of horses as well as injury to horse and rider for more than eight years.

After a thorough multi-year statistical and slo-motion video review of the current National Fence, the NSA took what it learned from the study, drawing specific and scientific conclusions on the National Fence and its weaknesses (and strengths).

The NSA consulted and then contracted with EASYFIX of Galway, Ireland to design and customized a new Fence specifically to meet the needs of the NSA today and well into the future.

The EASYFIX Fence is similar in nearly all regards to the National Fence we’ve been racing over for nearly 50 years with a few notable exceptions.

The EASYFIX Fence has been customized for the NSA and offers important state-of-the-art advantages over the current National Fence:

There is no steel in the EASYFIX Fence - it is made of a roto-mould plastic base, EASYFIX’s plastic birch, rubber matting, and styrofoam and is the same height as the National Fence: 51 inches tall.

Each EASYFIX section is 46” wide vs. 90” allowing lengthening or shortening of a flight based on racecourse and entries with the ability to ship in our current 48 foot NSA trailers.

EASYFIX's patented interlock between the sections is designed so that each section fits tightly and snugly on the “male” to “female” interlock.

This unique design adds significant downward pressure and weight to each flight - the sections can not and will not separate from each other.

Based on input from NSA horsemen and the Safety Committee, the breadth of the EASYFIX Fence is a bit broader than the National Fence by 8” to encourage better jumping of maidens and seasoned horses alike.

The EASYFIX Fence is made of a one-piece construction - horses can not put a foot between the roll and the steel frame as there is no gap.

The EASYFIX Fence is exceptionally easy and considerably less time consuming to set-up offering significant consistency from one Race Meet to the next - no need for last minute adjustments with tightening ropes and tarps.

YES, the exterior cover on the apron is BROWN turf not GREEN.

Unlike we humans, horses can not see differences in colors particularly brown, green and orange; only contrasting colors i.e. white (see the Exeter University study)

Based on strong encouragement and suggestions by NSA horsemen, EASYFIX designed just for the NSA, a very large “soft spot” in the middle part of the apron so that a horse sticking a errant foot into the apron will provide give.

Unlike the current foam rubber roll, the soft spot is not bottomless giving upon to 6” of support to a horse if he sticks his foot in a place it doesn’t belong.

Despite rumors to the contrary, this EASYFIX Fence can not flip over.