After three decades of service at the USEF, Sally Ike moves on as independant contractor for USEF in Rules Compliance

OLDWICK, N.J.--Sally Ike, an accomplished eventing competitor herself, worked for the AHSA, which morphed into the USEF, for 31 years in a variety of top positions, and now, rather than retire, she has chosen instead to move on utilize her expertise as an  independent contractor for USEF in Rules Compliance. 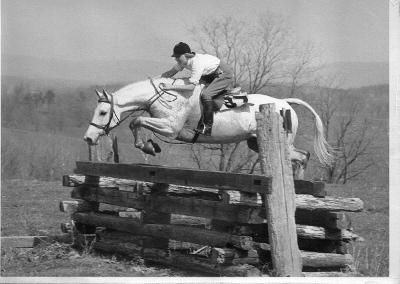 Sally Ike on Evening Mail"I mentioned to Bill Moroney that I wanted to slow down," said Ike as she is nearing her 76th birthday. "Bill knew that I was a part of an FEI program that rated World Cup qualifying classes, so he suggested my moving on to work with rules compliance."

"I've already been to three or four competitions this year." said Ike. "I like being closer to the sport, and this allows it. I'm looking forward to doing more as a judge."

While many people are familiar with Ike in her jobs in eventing and show jumping for USEF, not everyone is aware that she was also an extremely talented rider, winning top prizes in horse shows, eventing and timber racing.

IKE HAS always been been closely involved with the Essex Fox Hounds, having served as secretary for many years, and is now chairman of the hunt committee. 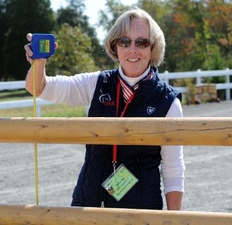 Sally Ike (Photo by Nancy Jaffer)Among her many talents, Ike has been recognized as a judge and course designer for eventing, and she has designed the show jumping course for Fair Hill International for many years.

Her career began as a competitor in hunter shows.

"My Uncle George Howell trained race horses," said Ike. "I bought a 3-year-old, Evening Mail, who had been on the track, from a friend of his for $1,500. He was difficult in the warm-up area all his life. While I was still doing hunters, he was second in the Stake class at Devon."

"I met Bill Haggard in 1965, and I became intrigued with eventing," said Ike, who then began competing in three-day events. "Evening Mail was USCTA Horse of he Year in 1966. I decided, with my family, to move him to England and competed there in 1967 and 1968. I didn't finish Badminton, but Evening Mail was placed at all the other events he went to there.

"In 1968, I was named to the short list for the squad to compete in the Mexico Olympics.

"I was secretary for the Essex Foxhounds until 1989, and during that time worked for Jill Slater, who married Phil Fanning and moved to Unionville. So Evening Mail's next career was as a race horse. He was the Ladies Champion of the Delaware Valley Point-to-Point Association for two years.

"I felt he deserved a shot at the Maryland Hunt Cup, so I got Frank Chapot to ride him, because I knew Frank could get him to the fences right. He was third in the Hunt Cup. He was a show hunter, and event horse and a timber racehorses and was sound all his life," said Ike.

"MARCH15, 1989 was my first day as Director of Eventing and Show Jumping at the AHSA," said Ike. "Then, after the Barcelona Games in 1992, Jackie Mars came to me and asked me how I felt about the job being split into eventing and show jumping. Jim Wolfe had helped me with getting the eventers ready for Barcelona, and he was going to take over eventing, so I said I'd love it if the job was split.

"I chose show jumping, because my heart is with eventing, and taking show jumping allowed my to have a finger in both."

Ike said that if she chose show jumping that she could get her judge's and technical delegate license in enenting, which she couldn't have done if she had stayed on in an administrative job in eventing,

"I felt I could do more for eventing than just be a paper pusher," said Ike. "Beginning in 2012, I knew I would want to pass the torch to someone else, so I hired Lizzie Chesson.

During her tenure as Director of Show jumping, Ike served with chefs d'equipe Frank Chapot and George Morris, and team during that period won numerous international medals, including two Olympic team gold medals.

Ike's next job with the USEF, beginning in 2012,  was as Managing Director of Licensed Officials.

Now, as an independent contractor for Rules Compliance, she said she has already been to dressage and hunter/jumper shows,

Ike will now have more time for other things such as her interest in art which began as a student at Miss Porter's School, more familiarly known as Farmington.

She has two children, Sara, who followed her  into the USEF where she works now in eventing, and Beth who works for aa law Center in Virginia.

Many owe a great deal to Ike's expertise over the years, and she has been honored by both the USHJA and the USEF for her service, including winning USHJA's Distinguished Service Award and the equivalent Sally Wheeler award from the USEF.