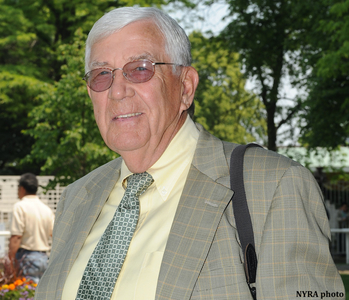 Frank Alexander Alexander's career began with his riding winning show horses, then moved to the race track and then included four or five years managing a top breeding establishment before returning for good to the track as a trainer.

Working with him at Petersen's were Dicky Hendriks and Ralph Caristo, both of whom continued to be life-long friends.

He bought Glen Head Stable in the early '60s,, and showed horse for Ava Miller, who was then married to Leverett  S. Miller, StaStill Farm and Ruth Nicholson, winning at shows like The National at the Garden, Fairfield and Piping Rock.

IN 1968, he married Linda Kelly, a marriage that continued for the rest of his life. 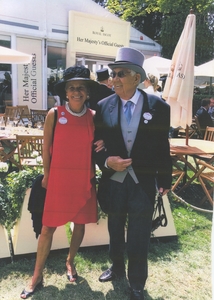 Frank and Linda Alexander at Royal AscotThey lived together from Long Island to Maryland, Florida, New Jersey and Saratoga, N.Y.

After retiring, Linda and Frank went to  the Royal Ascot meet around 2015, where they were in the circle of the Queen's official guests.

"Frank found that he loved getting all dressed up," said Linda.

"Dicky was a great friend of Frank's," said Wendy Hendriks. "We used to go to Saratoga and Florida and stay with Frank and Linda and go to the races with them."

"Frank was lots of fun, he had a great sense of humor," said Hendriks. "He could tell a good joke. I have great memories of those days."

He went to work for Mike Freeman at Belmont as an exercise rider in the  '60s, gradually moving up to be assistant trainer in charge of racing horses at Laurel, Bowie and Liberty Bell.

Alexander managed Sagamore for four and a half years in the early '70s, supervising the foaling of mares, breaking yearlings and galloping 2 year olds prior to their being sent to the track.

Going out on his own as a trainer in the mid '70s, Alexander soon met Cot Campbell and eventually became a private trainer for Dogwood Stable.

He was Campbell's first and only private trainer and during that period moved to Florida and New Jersey to train at Hialeah and Monmouth Park..

Alexander enjoyed a longstanding relationship with the late Cot Campbell of Dogwood Stable, for whom he trained Wallenda, winner of the 1993 G1 Super Derby at Louisiana Downs.

Alexander went back to being a public trainer, and Barry Schwartz sent him horses while he was at Calder.

"It was Barry who moved us up to New York," said Linda. "Frank also trained at Monmouth, and it was in the '80s that we started going to Saratoga."

"DD had some horses with Frank before I started training," said Michael Matz. "He did a real nice job for her."

"We stayed friends," said Matz. "We both liked polo, and had friends that played polo, so we'd meet at the polo games. We always stayed in touch."

The Alexanders bought houses in Saratoga and Hollywood, and moved between New York and Florida.

Alexander won 997 races from 1970 until his retirement in 2012, the biggest coming in the 1994 Breeders' Cup Sprint with Cherokee Run, who would be voted an Eclipse Award as the year's outstanding sprinter.

Cherokee Run, who won five other stakes and finished second to Prairie Bayou in the 1993 Preakness, went on to a highly successful stud career at Darley at Jonabell in Lexington, Ky.

He trained 73 other stakes winners during his career, including G1 winners K.J.'s Appeal, Wallenda, Nonsuch Bay and Lucky Roberto.

Alexander was based in New York for most of his career, wintering in South Florida.

He retired to Hollywood Beach, Fla., in 2012, telling Daily Racing Form's David Grening “I don't have any stock. It's getting harder and harder to get clients. You feel like a mom and pop operation between Lowe's and Home Depot.”

Mr. Alexander is survived by his wife of 52 years, Linda.

As of now, there are no services planned.

In lieu of flowers,, please make a donation to Racetrack Chaplaincy of America - NY division at P.O. Box