LEXINGTON, Ky.--The US Equestrian Board of Directors has unanimously elected Tom O’Mara as the organization’s new president with his term beginning in January 2021. 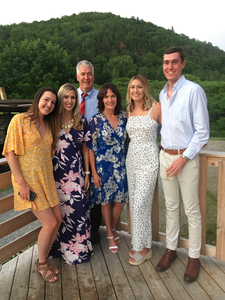 Tom O’Mara (center) with family (from left) Meg, Casey, Liz, Abby and TJ. (Photo from Tom O’Mara)The election took place as part of the Mid-Year Board of Directors Meeting on June 22 and 23, which was held virtually due to the COVID-19 pandemic.

O’Mara will take office at the 2021 US Equestrian Annual Meeting, currently scheduled for Jan. 12-17, in Austin, Texas.

O’Mara has been a member of the Board of Directors for four years, and has served as Secretary/Treasurer for the past two years.

He has been an active part of the hunter/jumper community for many years, where his wife, Liz, daughters Meg, Casey, and Abby, and son T.J., are active competitors.

Meg and T.J. are both past winners of the Hunter Seat Medal Final.

With a professional background as a financial services manager and consultant, O’Mara brought his business acumen to his role on the Board of Directors.

He took on the task of heading the Drugs and Medications/Lab Review Task Force, which ultimately led to the transfer of the USEF testing lab to the University of Kentucky.

O’Mara has also been active in elevating varsity equestrian as an intercollegiate sport.

“I AM thrilled that the Board has elected Tom O’Mara as my successor as USEF President,” said current president, Murray Kessler. “Tom is passionate about equestrian sport, is deeply experienced on USEF committees and the board, has unique experience with intercollegiate equestrian sports, and understands the importance of each of our 29 breeds and disciplines. He also brings real-world business experience to the position, which I found incredibly important over the past four years. I look forward to Tom building on the great progress made by the organization over the last four years and taking US Equestrian to the next level.“

"Tom has been an invaluable member of the Board of Directors over the past several years,” said US Equestrian CEO Bill Moroney. “His experience in the organization and equestrian sport at large paired with his willingness to listen to and learn from all segments of the horse show industry position him well for the role of USEF President. I’m looking forward to continuing to work with Tom in his new role.”

“It’s truly an honor to have been nominated for, and now elected, President of the United States Equestrian Federation,” said O’Mara. “I was fortunate to have worked with a great Board of Directors over the last four years led by President Murray Kessler, who I commend for having done so much in a relatively short time. Now, with that building block in hand, I see a lot more to come along the path he has set us on.

“I believe in the joy of horse sports and am focused on bringing the joy to as many people as we can,” O’Mara said. “US Equestrian members know the imprint that the horse has made in their lives. I really believe there are so many more with similar passion for the horse who we will connect with through a variety of new and expanded initiatives. Many have already reached out to me with suggestions and solutions and I look forward to a continued dialogue with members and affiliates about the future of equestrian sport.”

O’Mara will remain in his current role as Secretary/Treasurer until officially beginning his presidential term in January 2021.

Kessler will continue to serve as US Equestrian President through the 2021 Annual Meeting.