Bill introduced to impeach Gov. Tom Wolf over the way he handled Covid-19

HARRISBURG, Pa.--More than two dozen state legislators are mounting an impeachment effort against Gov. Tom Wolf because of his actions during the coronavirus outbreak. 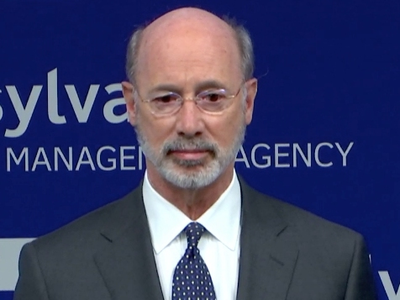 Gov. Tom WolfA bill containing five articles of impeachment was introduced Tuesday in the state House; the measure was sponsored by Republican Rep. Daryl Metcalfe of Butler County and has 24 co-sponsors.

The bill calls for Wolf's impeachment because:

His shutdown orders for two months amid the outbreak's peak in the state deprived state residents of their constitutional rights.

"Wolf's orders violate the freedom of speech and freedom of assembly rights guaranteed by the First Amendment," the bill states.

Additionally, a controversial waiver process in which individual businesses could appeal the shutdown order "was applied in an arbitrary and capricious manner, leading to inconsistent and unjust results," the measure alleges.

HE FAILED to sufficiently staff unemployment compensation offices during the shutdown, forcing some people to wait weeks to receive word that they were eligible for unemployment benefits.

"Desperate citizens of this Commonwealth have been unable to get assistance over the phone or via email from unemployment compensation offices to determine when they will receive benefits," the bill contends.

He failed to properly protect the most vulnerable to COVID-19, residents of nursing homes and long-term care facilities where the majority of coronavirus deaths have occurred.

"Although Gov. Wolf had ample notice that residents of nursing homes and long-term care facilities were at severe risk of dying from COVID-19, (he) failed to direct the Department of Health to develop and implement a comprehensive plan" that addressed the outbreak in such facilities.

He has actively withheld critical information pertaining to the outbreak from the public, media and General Assembly.

"State agencies under Gov. Wolf's jurisdiction have stopped responding to requests under the Right-to-Know law during the COVID-19 outbreak," the bill states.

"While these are certainly unprecedented and chaotic times, Gov. Tom Wolf must be held accountable for his actions that have harmed so many of our citizens and violated so many of our rights," Metcalfe said in a release. "Wolf's unconstitutional dictates and Orwellian overreach into our lives and the marketplace has caused immeasurable harm and hardship for far more Pennsylvanians than the virus."

Wolf's office called the bill's introduction "the latest example of House Republicans wasting time instead of helping to protect Pennsylvanians during this public health crisis."

"Over the past three months, Gov. Wolf has made very difficult decisions to combat this pandemic and to protect the life and health of all Pennsylvanians," Wolf press secretary Lyndsay Kensinger said.

"To reopen our commonwealth, the governor, based on the advice of expert epidemiologists and public health officials, has instituted a measured, phased-in approach so as not to undo our hard work and as outlined in the governor's announcement last Friday, this reopening plan is succeeding. "