YORK, Pa.--The National Steeplechase Association announced the death of Robert A. Kinsley, who built a multifaceted York, Pa., contracting company from the ground up and was a prominent steeplechase owner. 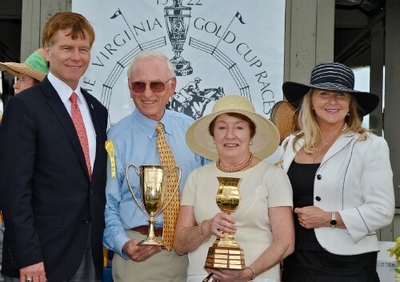 He and his wife, Anne, frequently attended steeplechase meets and raced several notable jump horses, including 2012 timber champion Incomplete, who was trained by Ann Stewart.

He also had horses with Elizabeth Voss and her late father, Tom Voss.

Kinsley also was joint master of the Elkridge Harford Hounds for 16 years.

“The Voss and Murray families are in deep mourning over the loss of our friend Bob Kinsley. We have been connected for many years through our mutual love of jump racing and foxhunting,” Elizabeth Voss said. “He loved his horses and would do whatever was best for them, no questions asked. It was truly an honor to know him and train his horses.”

Kinsley once told Jay Young, the president emeritus of the Elkridge Harford Hunt Cup, that he had a net worth of $19 when he and Anne arrived home from their honeymoon.

WITH THAT modest bankroll in 1964, he bought a shovel and a wheelbarrow, rented a truck, and set out to find work.

He found plenty of work.

Today, Kinsley Construction employs more than 3,000 workers and is involved in a wide range of projects, principally in the Mid-Atlantic region.

“We have lost an amazing leader,” said Robert A. Kinsley II, chief executive of Kinsley Enterprises, in a statement to company employees. “Bob was our founder, a visionary leader, and man with unfailing energy. He cannot be replaced. There are no words big enough to describe the impact he had on so many of us. All of us will remember just trying to keep up with him when he walked across a job site.”

While day-to-day operations of the company are managed by his sons, who “grew up” in the business, Kinsley was actively involved in business operations daily.

Relationships were paramount to him, and he made it a priority to visit project sites as much as possible, the company said in a Facebook posting.

In addition to the construction company, Kinsley Enterprises encompasses 17 other companies, including a steel fabrication and erection company, a crane company, an electrical contractor, an architectural and engineering firm, an IT firm, mechanical, electrical, and plumbing companies.

One of those companies, Kinsley Properties, owns 13 million square feet of office, industrial, and retail space as well as apartments and hotels.

Young noted that Kinsley also was instrumental in preserving the Gettysburg Battlefield, which had fallen into disrepair and had become heavily commercialized.

Kinsley formed the Gettysburg Foundation, became its president, and helped to raise $140-million for the battlefield’s restoration and maintenance.

“He was a role model. He is, was, and will always be my hero,” Young said in a note to Elkridge Harford members. “I admired and respected him truly more than anyone I have ever met in my life. His morals. His work ethic. His leadership skills. His generosity. His kindness. His love of animals and children. You rarely saw Bob without his rescued dogs glued to his legs or hanging out of a vintage truck. I was so fortunate to be able to become good friends with Bob Kinsley. It changed my life.”

Young told that story of a friend who told Kinsley about an old, quaint AME church on Old York Road that had sustained storm damage to its roof. Two days later, the church was surrounded by Kinsley’s distinctive red trucks, and his workers were repairing the roof.

One of Kinsley’s best steeplechase horses was Incomplete, who won the 2011 International Gold Cup and swept to the 2012 timber championship with a second victory in the My Lady’s Manor and a score in the Virginia Gold Cup, both against top-level competition.

He completed his perfect three-for-three season with a win in the National Sporting Library & Museum Cup.

Born on October 17, 1940, in Philadelphia, the son of the late Robert Wright Kinsley and the late Molly (Savin) Kinsley, he was a graduate of William Penn High School, and attended classes at York Junior College, Penn State York and the University of Baltimore.

He received an Honorary Degree from York College of Pennsylvania.

Mr. Kinsley was known equally for his business skills and as a champion for civic and community involvement.

Even though Mr. Kinsley spent his career building and developing, he felt a strong responsibility to land preservation. He was a founding member of the Farm and Natural Lands Trust of York County and felt proud to have preserved thousands of acres of land in southern Pennsylvania and northern Maryland.

In his personal life, Mr. Kinsley loved time in the fields and on the wooded trails of his farms; horseback riding, fishing and hunting.

He will be remembered for his unfailing love for animals.

A private service will be held later this summer.

Donations in lieu of flowers may be sent to the Gettysburg Foundation, 1195 Baltimore Pike, Gettysburg PA 17325; or York College of Pennsylvania, 441 Country Club Road, York PA 17403.