NEW YORK, N.Y.--The New York Times had an excellent front page story about Kevin Babington's fight to regain some if not all ability use his arms and legs after a fall at the Southampton Horse Show last summer. 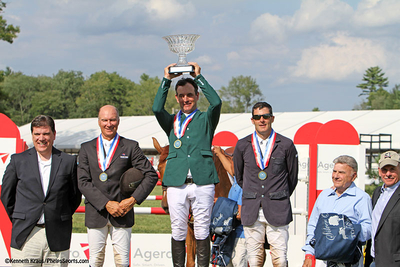 Kevin Babington celebrating a victory before his accidentpodiumThe story, entitled "After a Fall, an Equestrian Tries to Get Up", jumps to two pages inside the Sports section and includes a number of photos of both Kevin and Dianna, including a photo of Kevin on a machine that helps him to simulate walking during a rehab session at the Center for Neuro Recovery in North Palm Beach, Fla.

You can read the article by googling Kevin Babington and then clicking on the N.Y. Times article.

The article points out how many in the industry have pitched in to help Kevin, including Sisssy Wickes, who raised over $500,000 from 4,859 donors along with other GoFundMe sites and two people who lent Kevin their private planes to fly to medical facilities, including the Mayo Clinic in Minnesota, where he is a part of a stem cell study.

BUT IT also points out that Kevin has lost most of his income, the majority of which came from training and showing horses for various owners, and that ongoing costs will probably top $5 million,

"Five years ago, if you didn't regai function within the first six months, you were going to be stuck with what you're stuck with, but fortunately that's no longer the case," said Chet Moritz, a University of Washington Neurosurgeon who studies how to improve the rehabilitation of patients with spinal cord ijries. "Those who can afford to privately pay continue to get better."

Kevin has helped so many in the sport, and he deserves to be helped now.

He is a wonderful person who has given much to the sport, and, despite the constant pain that he is in, he is battling to regain movement.

"In February, he felt a twinge in his right thigh and was thrilled because he had felt similar twinges in his hands before he could move them. He now eels twinges in both legs and has felt a burning sensation in his left foot."

To support Kevin, no matter how samll the donation, send a check or go to The Babington Family Go Fund Me Campaign.