Letter to the Editor: From Katie Prudent 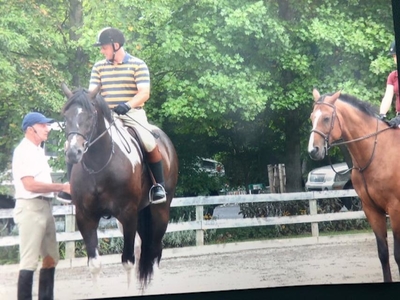 George Morris giving a clinic before SafeSportI was giving a lesson the other day to a group of my students who were competing here on the Florida circuit. The lesson was geared specifically around one junior, who had just lost his jumper classic the previous Sunday by knocking down the last vertical in the jump-off. In his
eagerness to win the class, this student had galloped to the last fence; found a flying distance; thrown his shoulders forward at the takeoff; allowed his horse to dive to the corner; and “BAM”, knocked down the jump!

During this calm Tuesday lesson, it was time to get back to basics. I set a low gymnastic line of several short one-strides. Then I asked the riders to stand straight up in their stirrups, not letting themselves lean forward or fall back as they jumped down the small line. I explained to
my students that this exercise was for body control, something vital to learn if they wanted to jump that last vertical clean.

As I watched the kids repeating this exercise, I started to cry. Because at that moment, I was reminded of something that I think of often: Everything that I know about teaching — everything that I’ve given my thousands of students over more than 40 years — was taught to
me by George Morris. The discipline, the exercises, the basics, the work ethic, striving always for high standards — it all comes from George.

George Morris has been the greatest influence in the American hunter/jumper/ equitation world for more than 50 years. When I was growing up, every professional copied George; every coach talked like George; every rider, trainer, judge, and groom cared what George thought of
how they did their job. When George was around, everyone was at their best.

What has happened in America over the last few years makes me very, very sad and also very angry. I want to ask some questions: First, what has SafeSport done to make our sport safer?

Next, I’d like to talk about George Morris’s two accusers. I was at Hunterdon, George’s barn in  Pittstown, New Jersey, when they were there. I’ve known them both for more than 40 years. The first accuser was always strange. He even went by another name during the Hunterdon days. I remember very well seeing him out at night, especially at horse shows. He was very druggy. Years later, he was arrested for and convicted of having child pornography on his computer. He is now and forever a registered sex offender in the state of Florida.

This man was banned from our sport by SafeSport. But guess what? The day after he testified against George, SafeSport reinstated him. He is now allowed to teach children at horse shows and at private farms. Does that sound safe to you?

The second accuser was a tall, strong young man. I remember that during our Hunterdon days, he was very friendly with a couple of the other young men at the barn. This individual’s story was that during a clinic George was giving, he was a demonstrator. During the night, George allegedly came into his room, held him down, and raped him all night long. He said he cried out for help, but no one came to save him. Again, guess what? A good friend of mine was also a demonstrator at that clinic. He had breakfast every day with the accuser and never heard, saw, or sensed anything unusual.

In addition, if you’ve ever done a clinic with George, then you know that he doesn’t even like to have dinner with the organizer. He goes back to his room with his notes and his books in order to be able to give every day and every student 150% of his energy. Personally, I don’t believe George’s accusers.

My third question is this:
• Who is behind these accusers?
• Who pushed them to tell their tales?
• Is there a person, or a family, who blames George for their own failures in life? Thinking it was George’s fault that they didn’t become as great as they thought they should be?
• Is there a high-up authority somewhere who thought it would be good for our sport to take down a high-profile figure?

In my opinion, Safe Sport has damaged our sport.

For me, George Morris is the greatest person any young rider could have grown up with. I think of the thousands of people George has helped over the years. So many of his students, including me, have gone on to become professionals with students of their own. It is fair to say that over the course of the last half century, George’s philosophy and teaching methods have been handed down through generations. Directly or indirectly, George has helped hundreds of thousands of riders around the world!

How can SafeSport be allowed to end the career of a great man whose life has been dedicated to helping people?
How can SafeSport be allowed to accept unproven accusations made by two men with questionable motives?
There is something VERY fishy and VERY dishonest in all of this. Who is behind it?
Furthermore, SafeSport acted illegally when they banned George Morris. In America, a person is innocent until PROVEN guilty. Not only was George Morris not proven guilty, his accusers are not even believable!

George Morris should be un-banned and immediately reinstated.