PIEDMONT POINT-TO-POINT and Hunter Pace, both scheduled for March 21, have been cancelled. 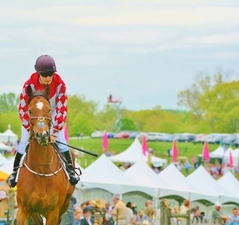 MR. STEWART'S CHESHIRE FOXHOUNDS ended its season early and is no longer hunting, and the Cocktail Party, scheduled for March 28 to celebrate the Point-to-Point, has been rescheduled for May 30.

All pre-purchased tickets will be honored on June 7th.
BRANDYWINE HILLS POINT-TO-POINT, scheduled for April 5, has been cancelled.

WINTERTHUR STEEPLECHASE, scheduled for Sunday, May 3, has been cancelled.

THE TATTERSALLS  Ascot March Sale, originally scheduled for Thursday, Mar. 19, has been cancelled, the sales company announced on Tuesday.

THE VIRGINIA GOLD CUP in The Plains, Va., originally scheduled for Saturday May 2, has been postponed to June 20.

All pre-purchased tickets for May 2 will be honored on June 20.

THE IROQUOIS STEEPLECHASE, originally scheduled for May 9, has beenl postponed to June 27.

PENN NATIONAL RACING has been suspended.

FASIG-TIPTON MIDLANTIC 22-YEAR-OLDS IN TRAINING SALE, originally scheduled for May 18-19, will be held May 26-27 at the Maryland State Fairgrounds in Timonium, Md.

The under tack show will be conducted Thursday, Friday, and Saturday, May 21-23.

THE NORTH AMERICAN LEAGUE, consistent with the USEF position based on concerns about COVID-19, will not sanction classes at any horse shows held during the next 30 days. Should any horse shows present “NAL” classes, the NAL will not grant points or count them in league standings.

Since March 12, 2020, NYRA has conducted live racing without fan attendance.

This announcement comes following consultation with the New York State Gaming Commission (NYSGC) and adheres to New York's ban on public gatherings of more than 50 people, as no live audience is permitted.