WEST CHESTER, Pa.--H. L. Schwartz III, who, as a reporter for The Associated Press in 1972 co-authored an exclusive story linking Richard Nixon’s re-election committee to the Watergate break-in and, in doing so, helped launch one of the biggest scandals of the 20th Century, died on June 11 after a long illness. 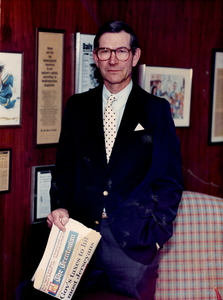 H.L. (Sandy) SchwartzHe was 83 years old. The cause of death was congestive heart failure

When five burglars were arrested in the early hours of Saturday June 18, 1972 inside Washington’s Watergate Hotel, which housed the Democratic National Committee headquarters, they all gave Hispanic names. There was no public
hint initially that they were engaged in anything but a common burglary.

However, acting on a tip Sunday morning June 19, Schwartz and Richard Barnes, another AP reporter who frequently teamed on stories, learned that one of the burglars had given the police as an alias the name James McCord. Expense records for Nixon’s re-election committee, which only Schwartz and Barnes had, showed a James McCord was the security coordinator the committee.
By Sunday afternoon, the two reporters had determined that in fact the burglar who gave McCord’s name as an alias and the real McCord were one in the same.

Sunday afternoon AP moved on its wires a story to that effect which stood unmatched through Monday June 20, a remarkable feat in a highly competitive market where the resources of the big dailies, The Washington Post and The Washington Star, far exceeded those of an AP bureau.

In October 1972, the prestigious Columbia Journalism Review called their Watergate exclusive one of the “largely uncredited achievements” of the year. The Post coverage went on to win the Pulitzer Prize that year.

SCHWARTZ spent 12 years with the AP starting in the Philadelphia bureau in 1961 and later working in Pittsburgh and Detroit before transferring to Washington.

Schwartz’s full name was Herman Livingston Schwartz III, but he was known to family and friends as Sandy. During a 40-year career as a reporter and editor with The AP and daily newspapers, he wrote under the byline H. L. Schwartz III.

As AP news editor in Detroit, he directed coverage by two dozen reporters and photographers of the 1967 Detroit riots and wrote many of the lead stories that AP flashed around the world. AP submitted the bureau’s coverage for a Pulitzer Prize which was won that year by the Detroit Free Press.

He also wrote many of the lead stories and oversaw coverage of the longest strike in auto industry history, the 109-day shutdown of Ford Motor Co. in 1967.

In 1972, he shared an Associated Press Managing Editors’ award for other distinguished work, including unraveling the mysterious travels of Arthur Bremer, who attempted to assassinate George Wallace, then governor of Alabama and a candidate for president. Barnes and Schwartz had worked together on that story.

In its May 1973 issue, The Washingtonian magazine listed Schwartz among 17 of the “best” investigative reporters in the capital, a list that included Bob Woodward and Carl Bernstein of the Washington Post, Seymour Hersh of the New York Times and Brit Hume, then a writer and editor with columnist Jack Anderson and later an anchor for Fox News.

“It is hard, often dull work to be a good investigative reporter,” the magazine said. “Some say the good ones are like lean grey wolves who quietly and singly go after their quarry.”

Besides AP, Schwartz worked as a reporter and editor on newspapers in Pennsylvania, Virginia and North Carolina and, between 1979 and 1998, when he took early retirement, was editor and publisher of The Delaware County, Pa., Daily Times; The Pottstown, Pa., Mercury; The Orange County Daily Pilot in Costa Mesa, Calif., and The Trentonian, in Trenton, N. J., all of which were part of the Journal Register group during those years.

ALONG WITH his wife, Sara B. Cavanagh, Schwartz founded The Horse of Delaware Valley, based in Unionville, Pa., in 1980 while he was serving as publisher of the Delaware County Daily Times and saw it grow during its heyday to one of the largest and most influential regional equestrian publications in the country although it served only the mid-Atlantic states of Pennsylvania, New Jersey, Delaware, Maryland and Virginia.

During that time, Sara Schwartz, a former world class rider who had never before written a news story, emerged as one of the most respected reporters in the equestrian press.

Jane Forbes Clark, a major industry figure for decades, once referred to her as “the gold standard” of equine journalists. Schwartz and his wife bought The Horse from Journal Register Co. in 1988.

Over the years, The Horse played an important role in influencing major issues facing the equestrian industry, including twice turning back insurgent efforts to seize control of the U. S. Equestrian Team.

But time, technology and changing reader interests took a heavy toll on the local horse industry and on newspapers and other publications of all sizes. When the recession that started in 2008 lingered, with the economy failing to recover quickly as it had after three previous recessions during the lifetime of The Horse, the owners had no choice but to fold it, with the last issue published in December, 2016.

A NATIVE of New York’s Long Island, Schwartz attended St. Paul’s School in Concord, N. H. (1949-1952), and the Pomfret School in Connecticut (1953-1954) as well as Williams College and Ursinus College in Collegeville, Pa. He never graduated from college.

Schwartz once wrote in a school alumni magazine that he had loved the schools he went to, but had hated schoolwork.

“I couldn’t wait to get out into the world and find out what life was really all about,” he said. He was not disappointed when he did.

Schwartz served on active duty in the U. S. Marine Corps. from 1955 to 1959 including six months in Lebanon with the U. S. Expeditionary Force sent to control riots in 1958. He attained the rank of sergeant. He always credited his Marine Corps service for overcoming lack of a college degree when he was hired or promoted by newspapers.

During his time as editor and publisher of The Trentonian in Trenton, N. J., from 1989 to 1998, circulation in the highly competitive market rose from 62,000 to and all-time high of 76,000. The paper was cited several times by the New Jersey Press Association as the most responsible in its circulation class in the state.

Over that period, the paper played the leading role in a tax revolt that led directly to turnover of the Democratic-controlled governorship and legislature, helped elect Trenton’s first black mayor and defeat a long-time Mercer county executive.

Schwartz also was proud of the fact that the editorial writer he appointed while publisher of The Mercury in Pottstown, Pa., won the 1990 Pulitzer Prize, the paper’s second, making it one of the few in the country in its circulation class (30,000) to win two Pulitzers.

He took early retirement in 1998 to devote fulltime to development of The Horse of Delaware Valley as well as a golf course near Cooperstown, N. Y., where his family went back to the 1700s.

Before failing health forced him to give up golf, Schwartz was a member of Hartefeld National Golf Club in Avondale, Pa., the Gleneagles Golf Club in Auchterarder, Scotland, and the Palm Beach Polo and Country Club in Wellington, Fla.

From 1993 to 2002 he was chairman of the executive committee and the major shareholder of the Otsego Golf Club in Springfield Center, N. Y., one of the oldest golf clubs in the country.

He was an avid runner and completed seven marathons in Washington, Virginia Beach and Philadelphia.

Schwartz was a descendant, on his paternal side, of Robert Livingston, a member of a five-man committee that drafted the Declaration of Independence. As chancellor (governor) of New York state, highest legal officer of the state, Livingston administered the presidential oath to George Washington. Later, as ambassador to France, he negotiated the Louisiana Purchase. On his maternal side, Schwartz was directly descended from Theodore Sedgewick, a delegate to the Continental Congress, fifth speaker of the U. S. House of Representatives and a judge of the Massachusetts Supreme Court.

Besides his wife, Schwartz is survived by a son, Timothy, an anthropologist and writer who lives in Haiti; another son died of leukemia in 1991; a brother, Arthur, of Stockbridge, Mass.; two stepsons, Lawrence and Frank, who live in Chester County, Pa.; one grandchild of Lexington, Ky.

At his request, there were no funeral services. He was cremated and his ashes scattered in Chester County along roads and trails where he and his wife had run and walked daily with their beloved Dobermanns and a German shepherd for almost 40 years. A memorial stone was to be placed in the family plot in Cherry Valley, N. Y.