DEVON, Pa.--Despite two evenings of rain delays of 45 minutes because of thunderstorms, attendance at the Devon Horse Show and Country Fair rose over last year's. 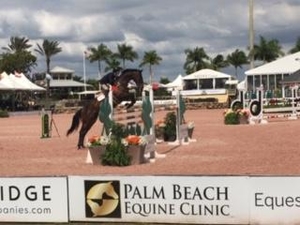 Laura Chapot on Pursuit of Happiness in a class at the Winter Equestrian Festival (Photo by Fran Clemens)"Attendance was up three to four percent year to year," said Devon Chairman and CEO Wayne W, Grafton. "We're excited about that. It was a very successful show."

Grafton said that the first Sunday, with Arena Eventing, Thursday, with the $250,000 Devon Sapphire Grand Prix, and the final Friday, with the $72,000 Idle Dice Stake, drew the three highest numbers of spectators.

The hunter and jumper divisions drew top horses and riders from Pennsylvania to California, Canada and Europe, including numerous Olympic medalists.

Also drawn to Devon were eventing and steeplechasing stars.

Among the eventing stars competing in Arena Eventing were Olympic veterans Boyd Martin, who won the class, and Buck Davidson, who was third. 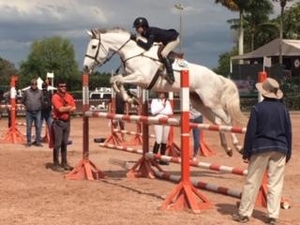 Laura Chapot on Timeless on the schooling ring at WEF (Photo by Fran Clemens)That clone, Gemini, had two of his get, a son and a daughter, competing in the Seven-Year-Old Young Jumper section, ridden by Laura Chapot.

Gemini stands in Europe, where breeders are overjoyed to be able to tap into the Bonn Nuit line.

Second to go in the jump-off was the grey mare Timeless, who was clean in the fast time of 31:550, and that time stood up until the last horse in the jump-off.

Chapot on the bay gelding Pursuit of Happiness went clean in 30:950 to beat herself and finish first and second.

Riding in the Young Jumper sections was top steeplechasing jockey Hadden Frost, who rides for leading trainer Jack Fisher, and counts upon the mounts he has won on is Doc Cebu, who was the leading timber horse in 2018.

On Tuesday Frost placed fourth on Missy Miller's Cillbhrid Rose in Six-Year-Old Young Jumpers,and he was eighth on his own PLS Cruising Suzy in the Seven-Year-Old class.

He didn't show on Wednesday.

"ALONG WITH having a successful show, we've solved some outstanding problems." said Grafton. "Parking has been a big issue at Devon. This year we opened up an additional 180 spaces in the lot next to Devon. That was very well received."

"In the evening, we started a new tradition," said Grafton. "After the show, there was entertainment under the South grandstand. Spectators could get coffee and Danish after the show while listening to the entertainment, thus missing some of the worst traffic jams leaving the show."

"There was a new exhibitors' lounge and a new grooms' kitchen, and both of those were very well received," Grafton said. "We got a lot of comments about them."

"We had 80 refurbished stall this year, and in two or three years we're closing in on refurnishing all the stalls on the Valley Forge Road side," said Grafton. "Between the practice ring and the Wheeler ring, there is new drainage, and you can walk there even during downpours without getting your shoes muddy."

"We put a lot of money and effort into cleaning things up, and we go a lot of comments on that," Grafton said. "People told us that they noticed that."

Grafton said that Devon will again hold a Fall Classic, all jumper show, after a year's hiatus.