WINTERTHUR, Del.--After over an hour of officials trying to make racing conditions safe, Winterthur Races were cancelled at 3 p.m. on Sunday, May 5. 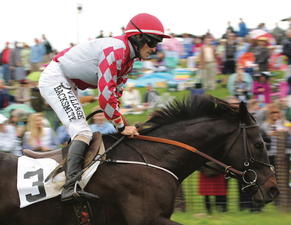 Photo by Ben Fournier Horses came to the paddock at about 1:45 for the first race.

There is one place in the race course where horses must run across a road that goes through the field where the races are held, and after about 15 minutes people in the paddock started hearing that one of the outriders had crossed that road and his horse had slipped badly.

The rumor going around was that there had been a mat placed across the road and that mulch had covered the mat, and that officials were going to remove the mat and recover the road.

At about 2:15, it was announced that there would be a 45 minute delay, so horses were to be untacked and returned to the barn, and the first race would be run at 3 p.m.

At about 2:50 all trainers were asked to meet in the barn, and about five minutes later it was announced that the races were cancelled as it was not possible to make the track safe.

Despite the rain and chilly temperature, there were still hundreds of tail-gate picnics and lots of spectators, and prizes were awarded for the best dressed lady and the best tail-gate picnic.