WINTERTHUR, Del.--The Winterthur Races on Sunday, May 5 features three timber races and one flat race and a carriage parade. 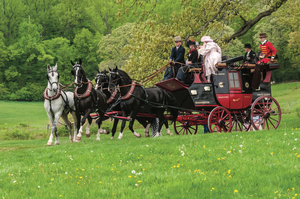 Both of Fisher's entries in the Stakes are owned by Bruton Street-US, and they are Two's Company (Ire), yo be ridden by Sean McDermott, and Lemony Bay, with no rider named as yet.

The program opens with the Isabella du Pont Sharp Memoria Maiden Timber that drew a full field of 10 with three also elibiles, followed by the Winterthur Bowl and the Vicmead Plate Allowance Timber that drew seven entries.

The final race is the Middletown Cup Allowance flat race for amateur riders.

Winterthur always draws a huge crowd, and there are prized for such things as best tailgate party.

The carriage parade is a beautiful procession of all sorts of carriages from four-in-hands to pairs, singles and ponies.