WELLINGTON, Fla.--Catherine Tyree on Bokai won over a 35-horse field in the $50,000 CSIO5* Grand Prix Qualifier, outpacing two of show jumping’s superstars in a three-horse jump-off. 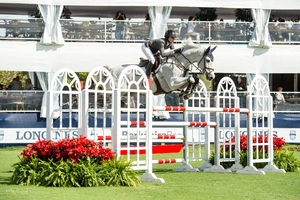 “Going first, I knew I had Beezie and Todd behind me, and both are very fast," said Tyree. "So, I thought I would give it a good shot. I knew there were only three for the jump-off, and I was guaranteed a top three finish no matter what, so I really wanted to use that to my advantage and gain experience going fast at this level. I’m finally getting comfortable at that. I was really happy with my horse and how everything played out. He was really great in the jump-off. He fought for me, and I really appreciate it when he does that.”

Minikus was clear over the Alan Wade-designed jump-off course but crossed the timers a little too late.

“HE DIDN'T turn very well after the oxer, so I got carried wide at the vertical," said Minikus. "That was probably where I couldn’t catch Catherine. These girls look like they’re very nice girls, but they’re not. They were supposed to play ‘old guy wins’ this week, but so far they’re not doing that.”

Madden and Breitling LS had eight faults in the jump-off, but she wasn't disappointed with their performance.

“Right now, my plan is to use Breitling in the Nations Cup on Sunday, so I didn’t want to put the pedal to the metal too much. I just wanted to give him a nice round again,” said Madden. “I felt his first round was good, but he hasn’t showed a lot lately, so I wanted to give him one more lap around and make sure he was confident and paying attention. I was happy with the way my jump-off went, and hopefully it will be a good result on Sunday.”

“The Jacobs family has been involved with the sport for so long, and it’s really something special that they plan this as their way to give back to all of us,” said Tyree. “They put on a great event, and I feel very lucky that we have it as an option, and every time that I have been here, it’s been nothing but great and run very well, so I’m very happy to be here.”

In the morning, the $10,000 CSIO5* Welcome Stake was won by Ashlee Bond on Donatello, who finished the speed track in a class-best time of 55.25 seconds.

Bond went late in the lineup, but she was unaffected by the strategy of the other riders and stuck to her original plan.

“I did not change my strategy,” said Bond. “I’m on a young horse; he’s just coming 8. I know him very well as I’ve had him since he was 6. I just kind of go out there and do my own plan, and if I win, great, but I just kind of feel that I have to stick to what is comfortable for me. That’s what I did and today, and it worked out!”

On Sunday, the marquee event, the $230,000 CSIO5* Nations Cup at 1:30 will showcase teams from Canada, Colombia, Ireland, Israel, Mexico and USA navigating courses set by one of the world’s most respected course designers, Ireland’s Alan Wade.

In addition to the six countries with teams, Australia, Brazil, Great Britain, Italy, Japan, Switzerland and Venezuela have riders competing as individuals.

Headlining this group are some of the sport’s most accomplished riders, including Great Britain’s Ben Maher, currently the seventh-ranked rider in the world according to the Longines Jumping Rankings, and Martin Fuchs of Switzerland, who made his Olympic debut in 2016 and was the individual silver medalist at the 2018 FEI World Equestrian Games™.