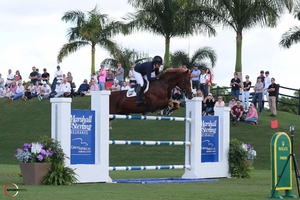 Beezie Madden on Darry Lou (Photo by Sportfot)Competing over a course set by Brazil’s Anderson Lima on the stunning grass derby field at Equestrian Village, 45 entries completed the first round, with 13 clear to advance to the jump-off.

Of those 13, it was a mix of show jumping veterans and up-and-coming rookies, but it was the veterans who would take the podium places on the day.

Olympian Amy Millar of Canada and her 2016 Olympic mount Heros, owned by Ammo Investments, set the early time to beat with a clear round in 41 seconds flat, which would hold up for seventh place.

The leading time was dropped to 38.87 seconds by 21-year-old Lucas Porter  riding Diamonte Darco, and they would finish in fourth place.

OLYMPIAN Margie Engle and Royce galloped through the timers in 40.19 seconds for sixth place, and they were bumped by Amanda Derbyshire (of Great Britain on Roulette BH, who finished in 39.10 seconds for fifth place.

It came down to a highly anticipated jump-off finale with three American riders in the top 4 in the country deciding the final placings.

It started with Ward on Tradition de la Roque, and with a slower rollback to start the course, they then picked up the pace and finished the course in 37.07 seconds for second place.

“I was slow one to two,” said Ward, who is ranked number two in the USEF Show Jumping List. “She was a little surprised by the inside turn, and I checked up. I knew I left some room there. With Beezie and Kent, one of them is going to get you if you leave an inch. But I’m thrilled with the mare.”

“What I like about her is what suits this type of a venue: she’s very solid in her brain,” he said. “She’s brave, she’s easy, she’s straightforward. She’s going to try to do a good job for you. She’s not going to be too impressed by the atmosphere, which is really the difficulty of this field.”

Olympic team silver medalist and ranked number three on the USEF Show Jumping List Kent Farrington  and Gazelle had a similar issue with the first rollback on course and finished just off the pace in 37.15 seconds for third place.

“I think with her not showing in a while, she was a bit impressed in the jump-off,” said Farrington of Gazelle, who last competed in Geneva, Switzerland, in December. “When I rolled back to number two, she goes super high. Same at the end when I rollback again short, she goes super high. In a class like this with these riders, that takes time, and that’s where I think I got caught today. But I’m very pleased with her performance.

“She’s very reliable on grass so I was confident to bring her out,” said Farrington. “I think the ground is fantastic on these fields, so I try to jump it as much as possible whenever they’re available for us.”

Last to go was Madden, who stands fourth on the USEF Show Jumping List, and with smooth turns and an open stride, they galloped down to the final Marshall & Sterling vertical and picked up the victory in a time of 36.80 seconds to the cheering of the crowd.

“It’s always a huge advantage to go last – well, not always, but most of the time – especially when I have Kent and McLain right in front of me,” said Madden. “It was awesome to be able to see them go and know what I had to do to win. I think I probably made it up one to two. I didn’t see how many strides they did, but I was quite quick there. I’m not sure you could do any less there. Then I think I kind of matched them everywhere else probably.”

“I like to jump on the grass whenever we have the opportunity," said Madden. "It was actually a nice beginning for him because I know he’s good on grass and in fields and has a lot of experience with that, so even though this is his first week, I thought I could aim him for the grand prix. I think a lot of horses like to jump on good grass. It’s more forgiving, and it sometimes has more spring too if it’s really good grass. This was excellent I would say.”