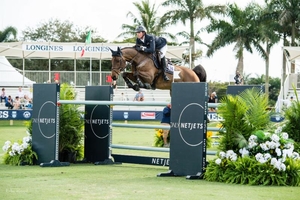 Ben Maher on Cirius du Ruisseau Z (Photo by Kathy Russell Photography)Just fractions of a second separated the top four, and the contest for third ended in a tie.

Maher on Cirus du Ruisseau Z won in 44.82, with Conor Swail of Ireland on Rubens LS la Silla second in 44.96, and Nayel Nassar of Eqypt on Lucifer V and Eve Jobs for the U.S. on Venue d'Fees des Hazalles tied for third in 45.04.

In the jump-off, five of the seven horse-and-rider combinations went clear on the Alan Wade-designed course.

“MY GUY is more scopey with more of a slower canter so it’s much more difficult when you’re up against these guys with quicker step horses," said Swail. "This is my first show with Rubens this year. and I was delighted with how he went. It was very close, I think there was .2 seconds between the first four. It was an exciting class. It’s great to be here. Even our warm-up rings are pristine. It’s a wonderful venue"

Swail’s place in the winner’s circle looked even more secure after Nassar went double clear on Lucifer V, but in a slightly slower time of 45.04 seconds.

Maher somehow managed to shave off .14 of a second on Cirus du Ruisseau Z to take the lead with a time of 44.82 seconds.

Jobs and Venue d'Fees des Hazalles also went double clear in 45.04, leaving them in a tie for third.

“I had a lucky draw,” said Maher. “I was quite close to the end with Darragh Kenny behind me. I decided not to go too quickly on the first three jumps, the difficult NetJets combination. With Cirus being a young horse, I just got that out of the way and really sped up towards the end. I didn’t think I was fast enough. Although I was quicker, there were two riders behind me that really knew what they had to do. Darragh definitely took some chances early on. Fortunately for me it didn’t pay off for him today. Everything just came up right for me.

“My horse loves to do his job. I promised him a day off tomorrow," said Maher. "I said he could go in the field if he jumped a clear round in the jump-off, so my groom will make sure that I hold my word to that tomorrow.

“This horse show is truly amazing – for the horses, the riders, the grooms and the owners,” Maher said. “Nothing is too much trouble. I have to say thank you to the Jacobs family for believing in our sport. Without that family and what they are doing here, a show like this wouldn’t exist. The way the show has developed in the last two to three years is incredible, and hopefully they are enjoying it too and they will continue to develop the show in the future. We all owe them a tremendous debt of gratitude.”