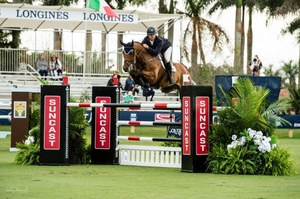 Alex Granato and Carlchen W (Photo by Kathy Russell Photography)Only four horse-and-rider combinations negotiated a double-clear on the Alan-Wade designed course and Granato was surprised at the numbers.

“I honestly didn’t expect there to be that many in the jump-off, but it was a good group and it was nice to see that there are that many ready to be here,” said Granato who finished the jump-off clean in 36.90 seconds. “A little bit of luck was on my side. My horse is naturally fast, so I just let him carry his pace. I tried to turn a bit tighter and I got away with a couple of rubs in the beginning, but I guess luck was on our side and we kept a quick pace, so we stayed on top.”

DANIELLE GOLDSTEIN flew around the course to claim the first double clear.

Riding Lizziemary, she stopped the Longines timers at 37.54 seconds. However, she had little doubt that someone would take over the lead.

“Honestly I came out thinking I left the door wide open so I was not surprised that I got beat quickly," said Goldstein. "I didn’t think that I would hold on to second. With so many in the jump-off, you think that somebody is going to catch you. I thought I was quick, but for sure I left the door open. I wish I hadn’t done that.”

“I made a point to come to this show," she said. "The footing is amazing. It’s been raining a lot the last week, but the footing felt that it hadn’t rained at all. It was really perfect. The management here is great and I very much enjoy coming to this show.”

“There wasn’t a whole lot of opportunity to gain a lot of speed from rider to rider," said Granato. "It was a pretty set track, you could only be tight. There weren’t a lot of options on leave-outs or turning inside somewhere that somebody else couldn’t do, you had to just tighten up the track and hold enough pace to be faster. I think they did a nice job.”

Jessica Springsteen of Colts Neck, N.J., also jumped double clear on Fleur de l'Aube in a time of 39.42 seconds, which was good enough for third.

“I always look forward to coming here,” said Springsteen. “Even when I first arrived here the other day, I had forgotten how beautiful it is. It really is an incredible venue and it is refreshing for the horses and riders and I am really happy to be here.” 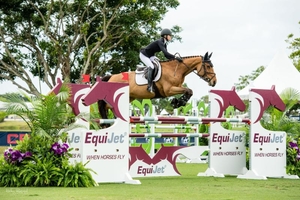 It was a big win for Kessler and a special one.

“I’m a little emotional," said Kessler. "This is a really, big deal. It’s such a special show, and the organizers have gone out of their way to make it a really special moment for everybody who shows here whether they win or lose, but to win on this field I just can’t believe it. I’m so thrilled.”

Kessler finished with the fastest clear round time of 63.948 seconds, easily defeating Schuyler Riley and Quilimbo, who went clear in 64.319 second, while reigning World Cup Champion Beezie Madden was third on Garant with a clear round in 66.276 seconds.

“Beezie is my hero,” said Kessler. “I have so much respect for her as we all do. It was also special because Kim Prince has been my friend for 30 years. She trained me yesterday and today because Pablo Barrios was busy at another show. So, for us to be together doing this and share these moments is very emotional.”

Thursday’s featured class at the Palm Beach Masters Winter Classic resulted in an international podium with Switzerland’s Martin Fuchs taking the top prize on Cristo in the FEI $35,700 CP Welcome Stake with Daniel Coyle of Ireland placing second on Quintin and Daniel Bluman of Israel taking third on Entano.

This was the first time in Florida and at Deeridge Farms for Fuchs and the individual silver medalist from the 2018 World Equestrian Games nearly made a rookie mistake.

“I walked it as a two-phase class, but when Daniel was going I realized it was a normal speed class," said Fuchs. "Normally that doesn’t happen to me because I am usually quite on it, but somehow, I missed that part. So, it was good for me to see a few riders go. I have a very fast and careful horse, so I knew I wouldn’t have to do something crazy to beat them, so I just tried to do the same round as they had done trusting in the speed of my horse to be a little faster at the end.”

The rain held off which made the class exciting as the 67 starters sped around the Alan Wade-designed course yielding 13 quick clear rounds, although second place finisher Coyle found it intimidating for his young horse Quintin.

“This is my horse’s first time here," said Coyle, who is the defending champion in Sunday’s $208,200 World Cup. "As a 9-year-old he’s a little green, but I’m hoping he’s good, and then we'll do the World Cup class on Sunday. I love it here and have always had good results. I can’t complain about anything. I will keep coming back.”

Bluman will keep coming back as well.

“When you are riding in a venue like this where the footing is good and the jumps are as nice as this and you have a great course designer, the horse gets better every time he jumps. This is the perfect venue to come and jump as much as you can.” 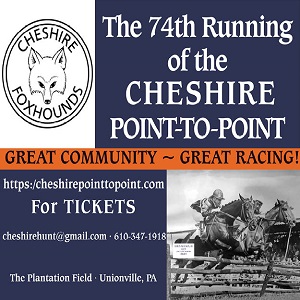 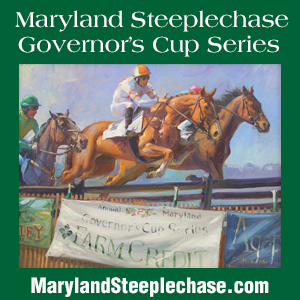