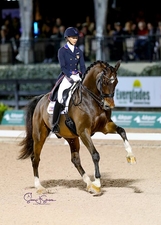 Laura Graves and Verdades“I wasn’t what sure which music I was going to do tonight," said Graves. "In the end, I’m very, very glad I chose to do my new music. I don’t know what else I would have been saving it for. I’m just glad that the timing worked out; I haven’t ridden to it yet. It’s supposed to be about the same as my last one, so I just crossed my fingers and hoped that it worked out and it did. I’m so lucky that Terri Gallo just takes whatever idea that I have.”

“I had a big mistake in my final pirouette," Graves said. "I came at him a bit strong in the spur. And then in the piaffe fan, which we haven’t touched since Aachen last year, I was a bit greedy and selfish in the warm-up. He let me know that he knows his job. He gives such a good feeling when he does go well that any little bump in my hand or my leg is shocking to me.”

SHELLY FRANCIS on Danilo was second with a score of 79.280%.

“I made little changes in some of the music," said Francis. "Just little ones, but I left the choreography mostly the same. A couple of years past he would get nervous and kind of get a bit dumb. Now he just gets a little bit of extra energy into it and I need an extra half halt instead of going, ‘It’s okay.’ He is really maturing, but he took me awhile.”

“He’s just a horse you need to take your time and don’t rush him,” she said of her 2018 FEI World Cup Finals partner. “He’s just really understanding the job and puts up with more. Sometimes in the grand prix I’m afraid to ask for a little bit more, and be kind of steady, but he lets me ask for more now. I just have to get braver. He’s getting much more honest and consistent.”

Tinne Vilhelmson Silfven of Sweden was third on Don Auriello with a score of 77.710 percent.

“It’s wonderful to be back, and judge," said Hans Christian Matthiesen, the judge at C . "An atmosphere like this, it’s really, really special. And then it’s just nice to be back and see some of these combinations that I’ve seen before, judged before, and then see them strive in this sometime difficult atmosphere when it gets so intense with all the spectators. It’s very special. I must say that I think they did really, really good. We had top performances today.”