WELLINGTON, Fla.--Scott Stewart of Flemington, N.J., last year's Leading Hunter Rider, returned to the Winter Equestrian Festival in winning form again as he won the championship in the Green Hunter 3’6” division on Thursday, Jan. 10 during Week 1. 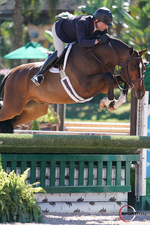 Scott Stewart and Bright Side (Photo by Sportfot)Stewart piloted a new mount, Bright Side, to an easy victory as the pair were awarded two firsts, a third, and a fourth over fences.

“We weren’t sure we were going to show him this week, but he was so good in the warm-ups on Tuesday that we decided to jump right in,” said Stewart. “Since I don’t know him very well, I just had to trust him. He went right out there and handled it exceptionally well.”

Stewart, of Flemington, NJ, has a new mount with the 8-year-old Dutch Warmblood gelding, who was purchased as an Adult Amateur 3’6” horse for his client, Stephanie Danhakl, only several weeks ago.

“He’s naturally a very good jumper and very confident, so he’s a great amateur horse,” Stewart said of Bright Side.

HUNTER veteran Kelley Farmer and Larry Glefke’s 6-year-old mare Me Too produced two solid rounds to secure second place in both the Handy and Stake classes, enough to earn them the reserve championship during opening week.

Brazil’s Celso Ariani won the first round of the $35,000 WEF Challenge Cup.

Ariani‘s mount, Ukulman de la Nutria, was fast and careful over the fences to top a six-horse jump-off over courses designed by Eric Hasbrouck, finishing in 40.530.