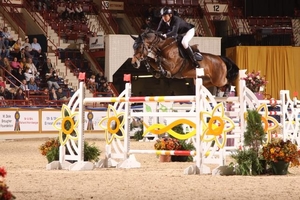 "I didn't expect to win," said Mändli, who also won the Prix in 2014, after the class. "I was already happy with my first round because I have a few big weeks ahead of me, so I just wanted to put in a nice round and see what happened, and it turned out great for me. I have been based in North Salem, N.Y., for five years, and I have come here all five years because I really like the show. It's a really good start for indoors, with enough space to ride and everything is so well organized. Overall it's a really nice show."

"I DIDN'T have a chance to watch anyone before me, but I heard what was going on," said Mändli, who finished clean in 37.66 seconds. "I knew that there was only one clear round, but I already had a plan," "I didn't want to go too fast or do anything that wouldn't work out, so I just made the round that I wanted and it was fast enough to win as well."

Jonathon Millar, , the only other clean round, finished second in 38.45 seconds on Bonzay.

"My first thought was that I wanted to jump clean and see how it played out. I thought I had left room for someone else to beat me," said Millar who eventually finished second. "My horse is a little sensitive and I wanted to play to his strengths so I tried to keep the turns short. It wasn't playing out that it was going to be a super fast class tonight, so I just wanted to leave the jumps up and see what happened."

World Equestrian Games U.S. Team Gold Medalist Adrienne Sternlicht had a rail for four faults on Toulago, but the time was 35.59, which was quick enough for third place, and her trainer, McLain Ward had a rail at the first part of the combination on Contagious and ended up in fourth place.

Olympic Canadian veteran Mario Deslauriers  on Amsterdam 27 also had a rail down in slower time for for fifth place, and Abigail McArdle on Victorio 5 had two rails down for eight faults to finish sixth. 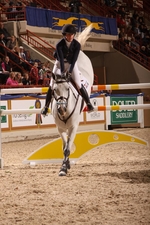 Kelli Cruciotti and Hadja Van Orshof (Photo by Al Cook)"It's amazing to win here. It's a feeling like no other," said Cruciotti. "We love Harrisburg, it's our favorite indoor show. We try to come every year. It has so much history and there are so many amazing riders who compete here, so it's a real privilege to show here."

Seven from the starting field of 34 made it to the speed round, with only two yielding double clear rounds over the Michel Vaillancourt-designed course.

Madden set the target time with the first double clear on Chic Hin D Hyrencourt in 33.09 seconds, but her lead was short lived as Cruciotti followed on Hadja Van Orshof setting a new goal with a clear round time of 32.99.

"My plan was to be smooth and simple and try to do the numbers but not too fast because she's going to be the horse I ride on Saturday as well," said Cruciotti. "She is really great about the turns, I was actually able to do one less to the double (combination), so I was really happy about that. The jump-off flowed beautifully and it rode great. With such a great course designer, it makes our job a little easier." 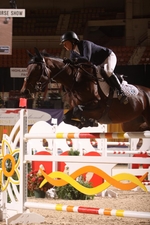 Beezie Madden and Jiva (Photo by Al Cook)Madden scored her second victory in as many days on Jiva, winning the $35,000 Keystone Classic Speed Stake on Friday evening.

Madden on Jiva had also won the $35,000 1.45m Harrisburg Sprint the day before and as a result were crowned Open Jumper Speed Champions.

Madden defeated Cruciotti by one second, going double clear in a time of 54.29 seconds.

Those two have been sharing the top two spots as Cruciotti also came in second to Madden in the Harrisburg Sprint.

"My horse was fantastic tonight," said Madden. "Kelli has been fantastic all week. We traded places. The other speed class I won and she was second. Then last night, (in the Big Jump) I was second. If it keeps going this way that will be fine with me."

"The course walked differently than it rode, so the ones at the beginning got a little surprised by that and so going at the end was a big advantage," said Madden."I think I saved time on the last line going in five strides to the last oxer and I think my horse has natural foot speed as well."

Cruciotti on Zidante was clear in 55.29 seconds to place second Friday evening.

"I went early in the order so we didn't get to watch any," said Cruciotti. "We just did the plan we thought we could execute the best. I'm thrilled with my horse. Any time you can be second to Beezie, it's like winning. I can't be disappointed at all, it's been amazing."