Kent Farrington won the $151,700 Grand Prix at WEF, and Audrey Schulze won the U25 Grand Prix 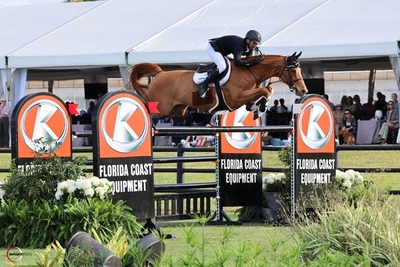 Five riders were clean over the course designed by Oscar Soberon.

Coyle on Gisborne VDL, a 13-year-old Dutch warmblood stallion, was first to go in the jump-off and set the pace at 40.05 seconds.

Next to go, Farrington on Landon, a 10-year-old Zangersheide gelding, quickly took over the lead by only fractions in 39.30 seconds, a time that could not be caught.

“Landon is a big-strided horse, but Daniel’s horse is also a big-strided horse, and I thought he had an incredible round,” said Farrington. “I probably have a little quicker foot speed than him, but it took a lot to beat that round today because he was dropping strides everywhere on a huge gallop the whole way around.”

“HE'S A VERY careful and a competitive horse,” said Farrington. “I have a great team coming up and he’s one of that group, so it was an exciting day for the horse and our team.”

“Landon has so much power and such a big stride, he has to learn to contain his power and we are starting to see that now," Farrington said. "His rounds are getting much smoother and the jump off today I thought was great.”

“I think this is a great part of what we have here in Wellington; different venues are great not only for the sport but for the horses that are here for a long time," said Farrington. "This is a huge grass ring and unique like an old turf field. I think it’s some of the best footing you can find in the world which is a great set up for places like Spruce Meadows and Aachen. We love to jump here as often as we can.”

Other than Belgium’s Zoe Conter and Ireland’s Tom Wachman, it was an all-American jump-off, and 13 were clean again.

Schulze on the 12-year-old Hanoverian gelding Darquito was the fastest, finishing clean in 38.18 seconds.

Darquito is the former ride of Ireland’s Andrew Bourns, and Bourns was the first to congratulate the pair as they left the ring.

“There were a lot of places without numbers where you just had to get on an open gallop, and luckily my horse has a huge stride where he just eats up the ground,” said Schulze. “His stride is definitely an advantage in the jump-off because it's much bigger than any other horse I’ve ever ridden, so it’s much easier to do one less stride everywhere.”

“I got him in July and within the first week of showing him, we won a national grand prix,” she said.

They have since had success across throughout North America and represented the U.S. at the 2022 FEI Jumping Nations Cup Youth Final in Kronenberg, Netherlands.

“It’s been really great getting to know him at all of these different venues," said Schulze. "He’s so much fun because he's so brave and anything I ask him to do he’s right there doing it.”

Natalie Dean on Dotcom D’Authuit was second, a little over a second slower than Schulze on a time of 39.50 seconds, and Mimi Gochman was third on Cosmos BH.

The 20-year-old Sophia rode Colter, a 2014 Hanoverian gelding by Franziscus, to the championship.

“Colter is green, so I’m working on just being calm and being in the hunter rings again,” said Gochman, who recently took a break from the hunter discipline show ring for a time. “I was focused on trying to be still and calm, and it worked out pretty well."

“Coming back to the hunter ring after focusing on jumpers for a couple years has given me a new appreciation for it,” said Gochman. “There is so much technical work that I think I forgot about, so it’s good to focus on that again.”

Gochman won two over fences classes during the division that was held over two days, with a high score of 89.

“This is actually my third show on him,” said Gochman. “I got him in August, but we are having a great time together.”