WELLINGTON, Fla.--Nicole Shahinian-Simpson on Akuna Mattata won the CHF37,000 ($40,000) WEF Challenge Cup Round 2 on the grass derby field on Friday, Jan. 20 at the Winter Equestrian Festival. 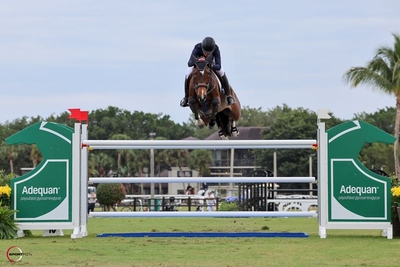 Nicole Shahinian Simpson on Akuna Mattata (Photo by Sportfot)Shahinian-Simpson has known Akuna Mattata since she was born 15years ago, one of three triplet fillies by embryo transfer out of her former mount SRF Dragonfly de Joter.

Akuna Mattata took some time to develop and hit a winning stride with Shahinian-Simpson in the international ranks.

Oscar Soberon set Friday’s track on the grass field and had 20 jump clear in the first round.

After eight elected to save their horses for Sunday’s CSI3* Grand Prix, Shahinian-Simpson faced off against 11 challengers.

“There were so many clear, I was questioning whether I was going to jump-off to get ready for Sunday,” said Shahinian-Simpson. “She feels fit and strong, and I don’t show her a lot, so I figured why not. The jump-off was nice with a lot of gallops. She covers the ground so fast. When you gallop the jumps on her you never really think about the clear, you just go to the jumps and she does the rest.”

SHAHINIAN-SIMPSON said that she doesn’t make her plan by watching others jump, instead she focuses on Akuna Mattata in the warm-up ring. “

"I don’t really like to watch anyone or chase anyone, it's more of a mental thing for me," she said..

“She is unique in many ways, and it takes a bit of a village to get prepared for the class, but once she’s in here she’s all show horse,” she said. “Quite honestly, it’s just her adrenaline is so high that she just sees red. But, after the round you can walk out on a loose rein and she’s a champion in the prize giving. She’s very quiet at the barn and an easy horse to take care of. When she gets up here and she knows it’s an important class, she’s all sport.”

Shahinian-Simpson was one of four clean in the jump-off and finished in 45.08 for the win.

As the last to return in the jump-off, Callie Schott finished just shy of the winning time in 45.11 to place second on Garant, and Adrienne Sternlicht on a new mount, Faquitol-S, was third in 46.34.