Ben Maher won the 1.45m Speed on the grass field at WEF 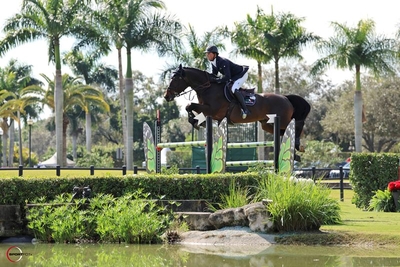 Maher won in a time of 67.07 seconds with Luiz Francisco De Azevedo of Brazil on Collin placing second in 69.26 seconds, and Max Wachman of Ireland on Quintin was third in 70.64 seconds.

Maher and the 20-year-old Tic Tac have a longstanding partnership.

“Tic Tac knows everything now, so it’s more about just keeping him fit and enjoying everything,” said Maher. “He stays here year-round; we don’t travel him to Europe. We’re very fortunate with the staff and team at home looking after him. He knows his job and he loves this arena."

“I’ve said this before, but I think this arena is one of the nicest grass arenas in the world,” said Maher. “It’s really old-school ground here and I think as an older horse, he likes the brighter jumps and loves the ground.”

“TIC TAC will jump the 1.50m on Saturday, and we will potentially bring him over one more time on the grass, but we are very limited with what we do with him, and we take care of him while he’s still enjoying it," said Maher. "He honestly still feels like he wants to do nothing else.”

Maher and Tic Tac have won the grand prix in the second week of WEF for the last two years running and are hoping to secure a hat trick in the CHF140,000 CSI3* Grand Prix on Sunday.

Maher has a string of horses competing at WEF and had a double win on Thursday, also scoring a victory in the $10,000 National Grand Prix Qualifier on Enjeu de Grisien in the International Arena.

Earlier in the day on the derby field, Ireland’s Bertram Allen won the Bainbridge 1.40m.