LOXAHATCHEE GROVES, Fla.--Venezuela's Luis Larrazabal on Baroness won the first Grand Prix of the 2023 Surf Tour season, beating a class of 16 over the course designed by Hector Loyola on Jan. 17. 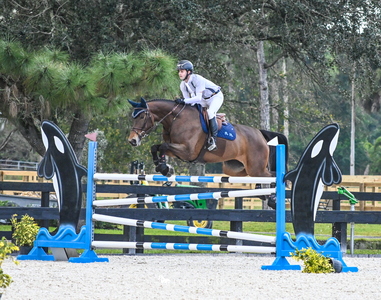 Luis Larrazabal on BaronessHeld at The Ridge at Wellington Groves' newly renovated show and training facility in Loxahatchee Groves, the Surf Tour includes a wide range of jumper classes from .80M to 1.40M, with Friday's $15,000 1.40M Grand Prix the first in the weekly series.

A passing cold front unleashed wind and rain to start off The Ridge's first $15,000 Grand Prix of 2023, but the uncharacteristically cold and wet weather didn't deter the riders, who persevered in both of The Ridge's two rings of competition.

Premier Equestrian's Protex Footing is the industry standard for exceptional competition surfaces, and is also used in the International Arena at Wellington International.

The Ridge's Grand Prix course was a welcoming track that included a skinny bicycle jump, three double combinations and a liverpool oxer as the final fence, to keep competitors on their toes.

Larrazabal and Baroness were the second to last to go, and set out to contest the leading times set by Daniel Bluman of Israel and Ireland's Jordan Coyle.

Larrazabal delivered an amazing double clear effort to top both of his competitors, crossing through the jump-off timers in 32.746 seconds.