Kristen VanderVeen and Marylisa Leffler win in jumpers at Sarasota 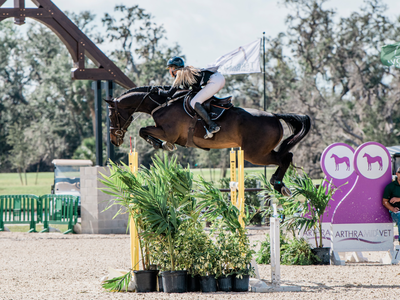 VanderVeen on Jireh was the first to  go, and was clean with only three clean after her, last week's winner Scott Keach on Wild Thing and  Sharn Wordley twice with Mick Jagger and Gatsby.

VanderVeen was first in the jump-off, clean in 35.702 seconds, and next to go, Wordley on Gatesby, was clean in 40.853 seconds to eventually place third.

Keach and Wild Thing was clean in 42.104 seconds, for fourth, and the last to go, Wordley on Mick Jagger, settled for second place on 40.104.

"I wasn't planning on going as fast as I did, but I'm still working out what the middle ground is and it ends up just being fast," VanderVeen said. "He's such a freak athlete that it's quite fun. I have many horses that are very nice, but I think that this horse is very special."

"I really liked the option of doing the grand prix in the morning so that we could do some other shows," she said. "I like the permanent new stabling, it's a lovely place to come in and have a nice setup. It was a great option for us to add onto our schedule with the horses we have."

TO OPEN the weekend on Jan. 12, Marylisa Leffler on Za Za Z won for the second time in Sarasota, this time in the $10,000 Welcome Stake over an 11 horse field. 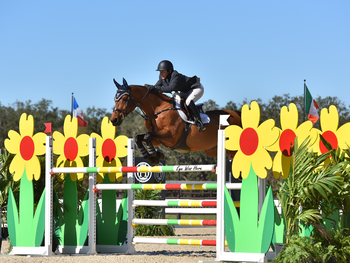 Marylisa Leffler on ZaZa Z (Photo by Eye Was Here)Only two were clean in the jump-off, David Jennings on Madeira SCF, who finished in 39.639 seconds, only to be beaten by Leffler on Za Za Z, clean in 39.075.

"She was a little bit fresh today, so I was just trying to keep her together in the first round," said the Maryland-based Leffler. "For the jump-off, I did eight strides up the first line where everyone else did seven strides, but I know she's so quick everywhere else. Then, I just took a bit of a stab at it to the last jump."

The win is one of many that the duo has accumulated over the years, and while the mare is known for being quirky, Leffler says, "We just get along. I don't try to interfere with her. I know when she goes in the ring, she's going to be game."

Leffler works alongside her sister Patty Foster and niece Ashley Foster-Worthington and is constantly on the move between the hunter, jumper and equitation rings.

"I like it because it doesn't give me enough time to think too much," she said, "I also have my niece Ashley helping me and she took over one of the rides I had today, so I didn't hold up the horse show."

Craig Starr of Morriston, Fla., on Christian Dior was third with one downed rail in the jump-off. 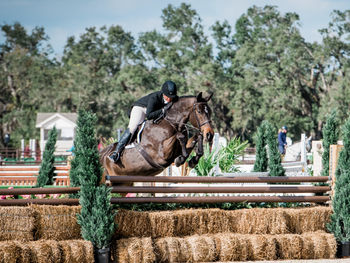 In the International Derby, Alfano on Next chose all four high options to score 185.00 and lead the class going into the handy round.

Last to enter the ring for the handy, having ridden the track twice aboard her other mounts, Ivy League and Wayside, Alfano on Next scored 178.00 points for an overall total of 363.00 for the win.

“She’s just an incredible horse so I knew I could do anything on her,” Alfano said. “I had a pretty good lead heading into the handy so I just wanted to be smooth and have neat turns.”

Alfano previously owned Next and is thrilled to have the mare back in her barn.

“She's so brave and has so much scope that you just can't build a jump she can’t jump,” she said. “She does it in beautiful style every time. She's just so fun to ride.”

David Jennings of Franklin, Tenn., was second place with a two-round total of 343.00 points on Jordantinus, and Alfano’s newest and least-experienced mount, Ivy League, was third with an overall score of 339.00.

Foster-Worthington rode Mahalo to win, with Leffler second on Wyatt.