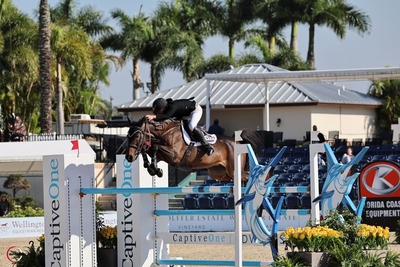 Jad Dana on After Eight (Photo by Sportfot)Ten of the 59 starters were clean over Nick Granat's 12 obstacle course.

Dana, 27, was clean in 37.70 seconds, almost two seconds faster than second placed Shane Sweetnam of Ireland on Out Of The Blue SCF, clean in 39.58 seconds, and Thaisa Erwin of Australia on Vanturo was clean but had two time faults to place third.

“She’s amazing and she’s been in top form; she won a grand prix two weeks ago and then she came out, was great in the first round and even better jump-off,” said Dana of the mount he has had a little over a year. “That was so fun to ride, and she makes it fun.”

“She’s a very complicated horse in the way she goes, but we have figured her out and our program at home is extremely simple," said Dana, who trains with U.S. Olympic team gold medalist Leslie Howard. "She’s an incredible jumper; she has her own way of going and we don’t actually try to change her, we work with her."

“It’s a really simple program, we don’t really jump school at home,” said Dana. “When we have a show, we might jump a tiny bit the week before. She doesn’t do any heavy flat work or any heavy work, it’s all simple. We try to keep her fit and comfortable, happy and feeling good and that’s why she can do what she does.”

“Leslie gave her to me to ride and it was a great partnership," said Dana. "Then her owners, Springhill Farm, bought her for me to ride and keep. I’m extremely thankful for that.”

JULIE HOGAN on Latoya was champion in the Adult Amateur Hunter 36-49 division after winning three over fences classes and the under saddle to collect championship points.

“Everything went really smoothly today,” she said. “We had a really great day yesterday, winning both over fences, and we won the flat today and I just wanted to go in today and put in a solid performance in the two over fences classes. My mare jumped really well and she’s a star.”

“This is our second show,” she said. “We had some success throughout the summer, so I was really looking forward to getting her here to show at WEF.”

“I am a real estate attorney and I also do equine law so I spend most of my day balancing riding and working,” she said. “Sometimes I am taking calls from horseback if needed.”

As far as goals for the season, Hogan said, “I’d say just to be consistent. We are off to a great start and I’m really looking forward to World Championship Hunter Rider week, as well as some Derbies.”