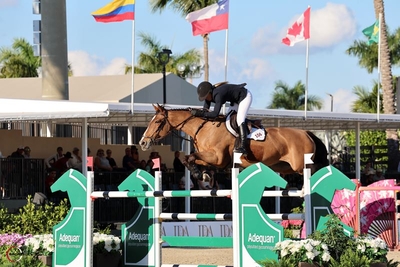 Sarah Scheiring on Margriet de Mariposa (Photo by Sportfot)There were 11 clean from a field of 69 to qualify for the jump-off over a course set by Nick Granat.

Only three were clean in the jump-off.

Scheiring finished the jump-off in a time of 37.30 seconds,to beat Jacob Pope on Highway FBH, who had finished in 38.29 seconds.

“For my jump-off I had quite a competitive plan,” she said. “I had planned on the six, which was the leave out from one to two, and it was a lot further away than I anticipated. Luckily, I have a superstar horse. I know that no matter what she’s always going to try her hardest, so I took a shot. It was a fast class; Allison and Jacob really laid it down.”

Pope placed second and Alison Robitaille on Oakingham Lira was third in a jump-off time of 40.25 seconds.

The fastest of the four-fault rounds in the jump-off was Ireland’s Daniel Coyle, who was fourth on Quintin, owned by Ariel Grange.

“WE HAVE a very short history; we went to our first horse show at Tryon in October and the very first week I showed her I jumped the CSI3* under the lights, which is saying that I trust her tremendously,” said Scheiring. "It’s a different league of animal than anything I have ever experienced. She is all heart, and she tries so hard. I think she got that from her mother, Flora De Mariposa, which was also an unreal horse. I think there’s nothing more important than the heart of a horse and she is all of that.” 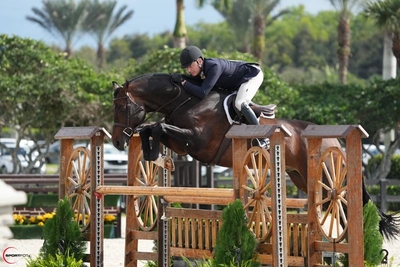 Scott Stewart on Hudson (Photo  by Sportfot)As the season gets underway, Scheiring noted how happy she is to be back among the palms in Florida.

“This is my favorite horse show of the year. I come here as quickly as I can after the summer showing and I leave as late as possible. Everything at WEF is perfectly done, and it’s the best place to develop horses.”

Stewart on Hudson was champion in the High-Performance Hunter division on Thursday.

Stewart won three over fences classes with scores of 87, 86 and 85.

“Hudson and I have had a couple years together now,” said Stewart. “We did the first years together and the High Performance last year, so I know him pretty well. He’s really brave and quite easy in the ring.”

“He’s a big, attractive horse and he’s a very easy jumping horse, so I think he’s very appealing going around.”

After winning the under saddle and one round over fences, Greg Crolick on Chappy was reserve champion.