WELLINGTON, Fla.--McLain Ward on Catoki won the $75,000 Grand Prix to wrap up Premiere Week in the International Arena on Sunday, Jan. 7 at the Winter Equestrian Festival. 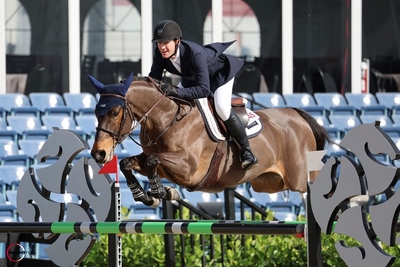 Mclain Ward on Catoki (Photo by Sportfot)The class had 26 compete over a 13 obstacle course designed by Eric Hasbrouck. including a triple combination that caused several rails.

The first four to jump clear and make the time allowed were Chris Ewanouski of Canada, Matt Williams of Australia, Jimmy Torano and Ward.

Richard Vogel of Germany and Michael Murphy in the latter half of the draw then joined the jump-off list.

Ward was clean in 29.003 seconds, a full three seconds faster than second placed Williams on Meadowvale Cruise, who finished in 32.959.

Ewanouski on Echo VH Gerendal was third with Vogel on Codex 28 fourth and Torano on Kochio Z fifth.

“HE'S FEELING great,” said Ward of his 2009 Holsteiner gelding. “He’s always great after a little bit of rest. He’s won so much and goes so fast; he almost gets a little bit like a racehorse. So, we gave him a long break after Toronto and he came back a little more mellow.”

Catoki and Ward had finished second to Vogel on Thursday in the WEF Challenge Cup.

“I was caught a little bit sleeping to the last fence. I added two and I meant to only check up once and Richie got me,” he said. “After the class, I told him I was sleeping, and he was going to have to go faster on Sunday. I knew he was coming behind me, so I wanted to be quite quick today!”

McLain is not only a competitor, he is also a trainer, coach and father.

“I’m hyper-competitive, so every day is a goal, but obviously the CSI5* grand prix are the focus,"Ward said. "We will be bringing out our best and most experienced horses for those events and those are probably the highlights.”

Ward repeated his 2022 success in this Premiere Grand Prix which last year kicked off a big season for him.

He went on to describe his daughter, Lilly, and how her riding and showing have progressed,

“I love it," said Ward. "We had itty bitty jumpers yesterday and two-second places. Lilly is doing a great job. It’s important to me that not only does she learn how to ride well and play the game well but also have a great appreciation for the horses and learn their personalities and the effort they give us.” 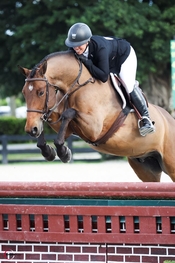 Jean Sheptoff on Verdict Photo by Sportfot)Sheptoff won two over fences classes in addition to a second a third ribbon for thechampionship at the conclusion of the week.

“Verdict jumped beautifully this weekend,” she said of her mount, who is coming off a long break since indoor competition in the fall. “He’s feeling his best as we start to gear up for hunter week during WEF 6.”

Sheptoff has had the ride on Verdict since he joined her string as a 6-year-old pre-green horse.

They have progressed into a solid partnership that is now earning champion honors in the highly competitive amateur-owner hunter ranks.

“The handy yesterday was a really fun course, and my horse really rises to the occasion in the handy, so that was a great day,” said Sheptoff her handy victory on Saturday. “I have basically been the only one riding him since we got him, so he always tries hard for me."

Sheptoff and her husband Cory Hardy own Newbury Farm and are based in Wellington for the winter season.

“Wellington International looks great,” said Sheptoff, who is from Littleton, Massachusetts. “The footing is great and I’m excited to show here for the season.”

Blink, ridden by Lee Kellogg Sadian was reserve champion tri-color in the division.