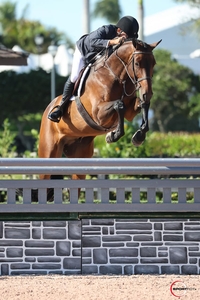 “The course was different; it wasn’t your typical turns, so you had to really pay attention to where you were going," said French. "There were times you thought you’d be going left, but really you were turning a little sharper to the right. Sometimes you do that in the handy, but there were a lot more turns today. It was definitely a true derby course and not your normal hunter course.”

French posted a second-round score of 193 to win easily.

“I practiced the slice for the handy in the warm-up area and he was a little green so I wasn’t sure when we went in the ring, but he actually jumped it really well,” said French. “He’s so nice that he jumps slow in the air and then lands slow so it’s easy to make pretty tight turns in the handy.”

Milagro will also carry Zoe Wolf in the junior hunter division this season.

ARGENTINA'S Tomas Yofre won the 1.40m Speed Challenge on Eliante Z over a starting field of 62 that competed over a course designed by Eric Hasbrouck. 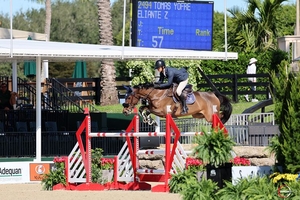 Tomas Yofre on Eliante (Photo by Sportfot)“I am so thankful to Olivia Broder and her family for trusting me with this special mare,” said Yofre of Eliante, who he's been riding since the end of the 2022 season. “She gets better and better. She is super careful and competitive, and I think she can win any class she wants.”

“I have a lot of expectations for the mare this season.," said Yofre. "I am super happy to have her as part of my string of horses because you always can count on her.”