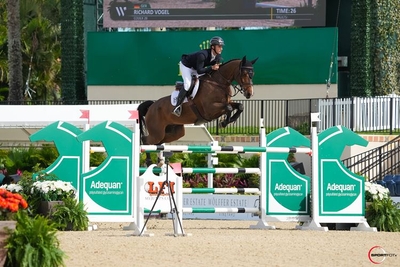 Richard Vogel on Codex 28 (Photo by Sportfot)A total of thirty-one entries jumped course designer Eric Hasbrouck’s first round course, with12 clean to go on to the jump-off.

Vogel on Codex 28 finished a quarter of a second ahead of two-time U.S. Olympic team gold medalist McLain Ward on Catoki.

After competing for a time at the national level with his owner, Codex 28 is now back ridden by Vogel, who said he is one of his most “promising horses for the future.”

“Codex is very sensitive which is good to have in a horse," said Vogel. "He’s careful and is always focused. It’s a special horse and I’m glad I have him.”

“I like when you have to be patient with them and need to think about each step before you actually do it," said Vogel. "It’s more complicated for the rider but it’s a good mission.”

After having three international wins during WEF 2022, including the Under 25 Final, 25-year-old Vogel is getting ready for another season in Wellington.

“I have to say I really looked forward to coming back,” he said. “It’s a really nice lifestyle here and it’s super for the horses. At the show, there are plenty of opportunities to bring them in the ring and allow them to grow in bigger sport. I try to have them all sound, healthy and happy and the rest comes by itself.”

ALWAYS THE  “one to beat” in the WEF hunter ring, Scott Stewart was champion in three divisions during the first two days of professional hunter competition at WEF. 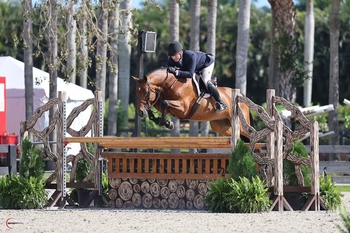 Scott Stewart on Jordan (Photo by Sportfot)The first championship was in the 3’9” Green Hunter division in the E.R. Mische Grand Hunter Stadium on Thursday.

Stewart, of Flemington, N.J., rode Jordan to win first, second, and third-place ribbons, posting two scores of 88.5, 87 and 88 throughout four rounds of jumping.

“It’s exciting to be back, I love it here," said Stewart. "I brought out a small group of horses and they all did well this week. Sophie Gochman bought Jordan at the end of last year, and he was champion throughout indoors. He’s such a good jumper and a real trier.”

Standing at about 15-hands, Jordan is small but has style.

“He’s so scopey and one of the most fun to ride,” said Stewart. “The goal for him this season is really to do well in the amateurs with Sophie.”

When not winning the professional ranks with Stewart, Jordan is in the reins of Gochman in the 18-35 Amateur-Owner Hunter division.