WELLINGTON, Fla.--Jad Dana of Lebanon on Fleur-De-Lis' Cheerie won the $50,000 Grand Prix on New Year’s Eve, which closed his year on a high note in the final Grand Prix of the 2022 ESP Holiday Series in Wellington. 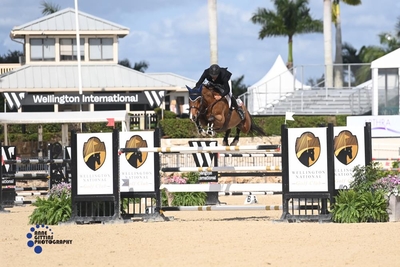 Jad Dana on Fleur De Lis Cherie(Photo by Anne Gittins)“I am feeling really good,” Dana said. “I’m very lucky to get to ride these two mares, Fleur-De-Lis’ Cherie and After Eight with the support of my trainer, Leslie Howard, and her husband, the horses’ owners, and my parents. I feel like I have a lot of support! Leslie and Peter are giving me so many opportunities to succeed and I can’t say how grateful I am for them.”

"Fleur-De-Lis’ Cherie is absolutely amazing," said Dana. "I really have a very special connection with her. When I first started riding her, I was only jumping 1.20. and 1.25m. She is such a fighter and really wants to win, so she gives everything she can, and I know her so well now that I know what classes are for her and what to aim for.”

In the first round, 16 were clean over Anthony D’Ambrosio’s course, with seven countries represented, Brazil, Ireland, Spain, Israel, the United States, France, and Labanon.

SECOND TO LAST to go in the jump-off, Dana was clean in 43.213 seconds to post the win.

Dana is now looking forward to  the Winter Equestrian Festival, which begins Jan. 4.

“We have many young sales horses, so I really want to work on them," said Dana. "Besides me trying to jump bigger FEI classes, getting more ranking points, and getting my name out there, I really want to continue working with the younger horses and try to develop them to their best abilities. I also give a lot of my time to our students. Their results are as important to me as my results, if not more. The people that ride with us are extremely important and they make it happen for us, really.”

Placing second was Tomas Yofre of Argentina on Cardora, clean in 31.428 seconds, and third was Nikko Ritter on Aquiles Del Caribe Z, clean in 32.102 seconds.

On Friday, the $5,000 1.35m Open Jumper Stake was won by Andres Torres of Columbia on Picara Polka Amouretta, double-clear with a jump-off time of 38.71 seconds.

Francisco Goyoaga of Spain on Jakima-VL, clean in 38.83 seconds, was second, and in third was Elli Yeager on Iceman De Muze, clean in 39.199 seconds.