Tanner Korotkin won the $40,000 Grand Prix on Quinn 33 in Wellington 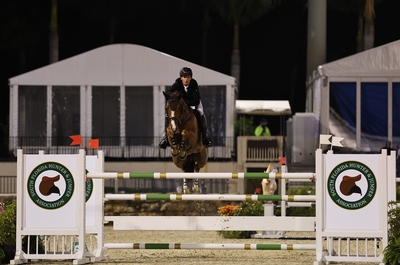 Tanner Korotkin on Quinn 33 (Photo by Carly Nasznic Photography)Only nine from a starting field of 36 were clean over the course designed by Oscar Soberon.

Korotkin was fourth in the jump-off and was clean in 40.664 seconds to eventually win.

“It was definitely a tough class with a lot of good riders and good horses,” said Korotkin. “I came here equipped with three of my horses – one of my main ones, my younger one, and Quinn, who is just an absolute machine. I knew I had one of the best horses in the class and one of the fastest, so I knew if I was clear, I had what it takes to win.”

“The course itself was great and it was a good start to the night classes here in Florida,"he said. "It was tough enough and asked a lot of questions. Overall, to have nine riders go clear from 36 isn’t too bad.”

With a clear time of 41.874 seconds, Shane Sweetnam of Ireland on Out of the Blue SCF was second, and David O’Brien on Darius De Kezeg Z  was third, clean in 42.509 seconds.

“I’M PLANNING on doing Voloz Diamond next week in the four-star Grand Prix, and Quinn will do some of the four-star ranking classes," said Korotkin. "I’m planning to compete with Orwell this winter season and try to get him in the three-star stuff. He’s only 8, so we’re slowly stepping him into some of the bigger stuff, but we did some FEI classes this summer."

“We have a lot of very big goals this WEF and after WEF, and my horses are going great," he said. "I’m very excited to kick this season off and get into some of the bigger classes again this season.”

Harry Allen of Ireland on Carrera Denfer was second, clean in 34.395 seconds, and Alberto Michan of Israel on Kabuki was third in 34.761 seconds.

Sweetnam on Out of the Blue SCF was second, clean in 43.703 seconds, and Sheer Levitin on Vitus K was clean in 45.853 seconds to place third.