Darragh Kerins on Lissino won the $137,000 Grand Prix in Wellington

WELLINGTON, Fla.--Ireland’s Darragh Kerins on Lissino won the $137,000 Grand Prix CSI3* in the International Arena at the ESP Pre-Charity CSI3* on Sunday, Nov. 20. 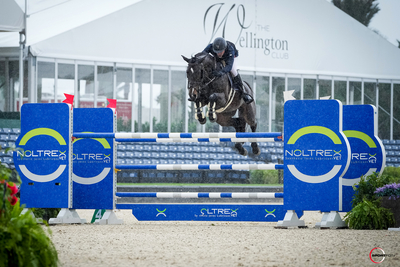 Darragh Kerins on Lissino (photo by Sportfot)“I’ve been riding him on and off for the last two years," said Kerins. "He actually had a small injury around this time last year and pretty much missed the whole year. We started bringing him back to jumping at the end of August. He has come back feeling better than ever; he feels unbelievable. He jumped great in the qualifier the other day with a fast jump-off, and I was really excited to do the grand prix with him today. I didn’t know what to expect after watching everyone else go in the first round, but he gave me everything today. He’s an unbelievable horse.”

Thirty-three had qualified for the Grand Prix, but over Andy Christiansen’s challenging course only Peter Lutz had been able to go clean within the time allowed until Kerins on Lissino eventually forced a jump-off by going clean as the last to go.

“WHEN I walked the course today, it definitely walked hard, but I didn’t think it was going to turn out that difficult," said Kerins. "The time allowed was a big issue and in the combination line you could either do a seven or an eight, so there were options everywhere.”

Lutz on Hollerno, first in the jump-off, was clean in 47.91 seconds, but Kerins and Lissino sliced nearly a full second off their time with a clear round in 47.02 seconds to win the class.

Sayre Happy was third on Vinci De Beaufour with a clear first-round time of 81.17 seconds and two time faults.

“I think the footing here is great and the new stabling looks fantastic," said Kerins. "I’m really excited about this upcoming winter season. Hopefully, I can rack up enough points to get into some of the five-star classes with him. I really feel like this is going to be his season.”

Immediately following the CSI3* grand prix, the $25,000 Grand Prix had 20 competitors, five of which went clean.

In the jump-off, clean in the fastest time, Sydney Shullman-Desiderio of Israel on J-Boston S.E. won the class with a time of 38.444 seconds.