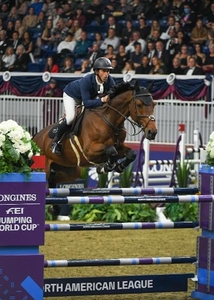 Three-time World Cup champion Rodrigo Pessoa of Brazil and Dello Joio, as last to go, made it a six-horse jump-off.

As the first rider back in the jump-off, Farrington put the pressure on those still to come with a clean round in 34.15 seconds.

No one could match his time until the last to go, when Dello Joio on Cornet’s Cambridge was clean in 32.53 seconds.

Farrington had to settle for second, while Deslauriers produced the fastest four-fault round on Bardolina 2 to place third.

“This is probably my favorite show that I’ve done so far, and I’ve only been here for two days!” said Dello Joio. “It’s just next level; it’s a real show. All 24 riders that are here in the international division can win on any given night. Everybody has earned their right to be here.

“The last time I came here was when I was a kid and my dad was showing, and my only memory is the cinnamon rolls,” said Dello Joio, 33, who is the son of U.S. Olympic bronze medalist Norman Dello Joio. “That was the highlight of my trip here last time, and this win tops it!”

“IT'S HARD to put into words but there’s something about this horse; his personality and just the feeling you get when you’re on him," said Dello Joio. "If you watch him jump, he’s not an extravagant jumper or flashy, but as I say all the time, you can’t beat a smart horse, and he is by far the most intelligent horse that I’ve ever been around.” 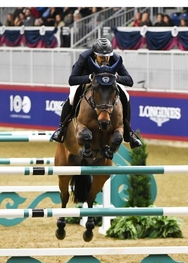 Kraut won in a five-horse jump-off, crossing the timers in 31.85 seconds while Kristen Vanderveen on Faustino de Tili and Ireland’s Conor Swail on Theo 160 tied for second when both finished the jump-off with a time of 32.68 seconds.

Swiss Olympic medalist Beat Mändli was the first to go clean in 56.70 seconds on Chartraine Pre Noir,  and a few rounds later, it was Nayel Nassar who turned in a blazing clean round in 53.54 seconds with El Conde.

Last to go, three-time Olympic gold medalist McLain Ward gave the packed house a thrill by coming close with Lezaro, stopping the clock in 54.05 seconds to settle for second place while Mändli finished in third.

“Michel Vaillancourt was tough on us today, giving us really full rollbacks, not just half-turns,” said Nassar, who is making his debut trip to the Royal Horse Show. “At the same time, we had some very tall and delicate verticals, which you needed to jump clear. It’s always really difficult to keep your rhythm in a ring like this, especially when you’re trying to go against the clock. It was all about finding the balance between speed versus precision. Luckily, we managed to get on the right side of that today.”

“He’s really my type of horse,” said Nassar of El Conde, who was bred in Belgium by 2010 world champion Phillippe Le Jeune and carries Connemara pony lineage on his dam's side. “We clicked really well from the get-go. He’s small and fast and has a lot of blood. He’s always looking for the next fence. He is just such a fighter in every sense of the word. He’s a great guy.”

“Competing at The Royal has been unbelievable,” said 31-year-old Nassar. “I have no words. These are the events that really motivate you as a rider and force you to dig in a little bit more, and the horses feel the pressure too. This sort of atmosphere brings out the best in horses, especially the good horses. They know when it’s time to rise to the occasion with a big crowd like that, and El Conde definitely knew it and was on tonight.”