Augusta Iwasaki won the Maclay Championship at the National 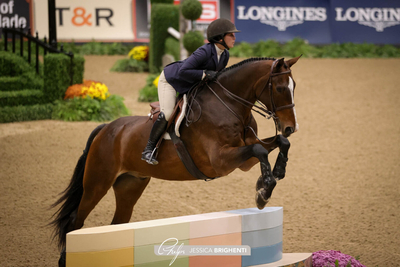 Augusta Iwasaki (Photo by Jessica Brighenti)Since 1933, the Maclay  has crowned junior champions, many of whom have gone on to international stardom, and this year 221 young riders competed for the win and ASPCA Alfred B. Maclay trophy.

After the first round and the flat work, the judges had 24 riders return in reverse order of preference for the third phase of competition, a second over fences trip.

The track, once again laid by Murphy, featured a number of obstacles from round one, but with a new pattern that posed new challenges.

Then, five were called back for a final test that featured a series of technical variations; a hand gallop to fence two, a canter to fence nine, a walk transition followed by a turn on the haunches, and a reverse counter canter to fence eight.

The test required riders to keep their horses between their hands and their legs.

ISABELLA  DAVID of Holmdel, N.J., on Castlefield Spartacus was first to go in the test, followed by Californian Augusta Iwasaki on Izar, who made quick and handy work of the test.

Texan Luke Jensen on Jamaica gave Iwasaki a run for the money, but eventually placed second to Iwasaki, who for the last two years has had wins from coast to coast.

“I honestly am so shocked, I can’t really believe this happened. I went very early this morning and I thought we put in a solid round, probably not the best round we have ever had,” said Iwasaki. “I kept fighting all day long and was just hoping to do the best that I could. This has been so special and this is my last show as a junior so it is amazing.”

"I started showing Izar at the beginning of this season," said Iwasaki, who had been seventeenth after the first round but had moved up places after each test. "It's so amazing to win in his first finals."

"The advanced riders showed us a variety of skills,"said judge Michael Tobaruk. "We were hoping to see brilliance,and we saw that with Gussie. She rode to win and won. She kept moving up. She was solid on the flat. It was a long day with a lot of phases, and she kept impressing us."

"We had discussed not testing again after the three phases, but after the second jumping round we didn't feel we had a winner," said judge Robin Rost Brown. "We both wanted to see the riders be able to adjust their horses, opening and closing strides, and a nice flow and clear, concise forward riding, but the ability to shorten their horses as well.”

"We were trusting all  the work we had done at home to get ready and make a plan for these tests," said Jensen, who rode Jamaica, a horse that had had such a traumatic experience when Jensen started taking care of him and riding him that it took Jensen months to get him rideable (see story in the NEWS section of The Horse).