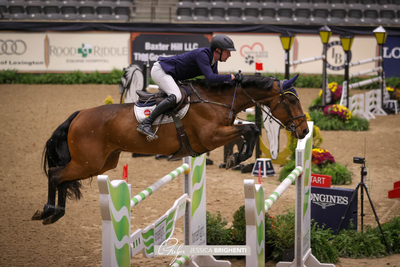 Daniel Coyle on Carlyle (Photo by Jessica Brighenti)Guilherme Jorge of Brazil set the first-phase track of eight fences,  with the clean trips going on to the seven fence track against the clock.

Setting the pace with the first double-clear effort was Kelli Cruciotti-Vanderveen on Forever SFN, the second to go in the class of 30. who finished in 31.53 seconds and set the time to beat.

Cruciotti-Vanderveen held the lead for 10 trips until Charlotte Jacobs on Rincoola Milsean finished a speedy second phase in 31.45 to go into the lead, which she held until until the very last entry.

Coyle on Carlyle won his second class in the  international jumper competition, finishing in 31.18 seconds to win the Cavcote Trophy, presented by past President Theodore and Mrs. Cushny and Mrs. H.L. Schwarz.

The Champions and Reserve Champions from the hunter sections that competed over jumps at the 3’3″ height or higher qualified for the Classic.

Michael Britt-Leon, Callie Seaman, and Augusta Iwasaki each had two horses in the class that began with the 4’ section, which included two horses ridden by Britt-Leon, then followed the jumps to 3’9” for four competitors, then 3’6” for 14, and finally finished at the 3’3” height for the remaining seven riders.

Following the first round, the top 12 returned for the second round.

Both Iwasaki on Small Love and Hunt Tosh on Corragio scored the highest with scores of 91 points, but Michael Britt-Leon on Private I and Greg Crolick on Chappy were not far behind, both with first round scores of 87.50.

In the handy hunter round, Britt-Leon on Private I scored 89.00 points for a two round total of 176.50 points to take an early lead in the class.

Only three rides later, Croclick piloted the 11 year-old Mecklenburg gelding to another textbook handy ride taking inside turns and showing Chappy’s adjustability over the 3’9” track, earning a score of 86.50 and 174 points overall.

Eleventh to contest in the 12 horse handy round, Iwasaki knew what she had to do in order to win.

Iwasaki rode the 9 year-old Hanoverian mare to the class high score of 91.50 points to secure a six point lead in the class with 182.50 points from the two rounds.

An added bonus for the hunter riders, the top three scoring junior and amateur riders received an additional $10,000 bonus to be split between them. I

Iwasaki was the highest scoring junior followed by Clara Propp and Joey Roman.

For the amateurs, Jean Sheptoff led followed by Alexa Bing and Callie Seaman.

Sharing the title of Grand Junior Hunter Champion this year were Commentary, ridden by Ella Bikoff and Babylon, ridden by Ariana Marnell.

Madeline Brooks on Captain Jack won the championship in the Junior Hunter 3’3”.