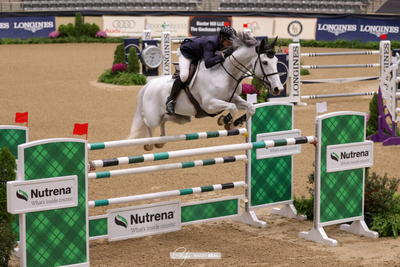 Devin Ryan on Eddie Blue (Photo by Bailey Beal)Ryan won despite the disadvantage of going first in the jump-off of eight from the starting field of 38 representing 11 nations, including Brazil, Belgium, Australia, Israel, and the United States.

Returning to the Alltech Arena in the order they went clear in the first round, Ryan went first, going clean in 41.48 seconds.

“When it came down to the jump-off, I know he’s not naturally the quickest horse, but he has a big stride and he is a very careful horse, ” said Ryan. “So I can turn back on a fence and maybe don’t have to give him as much room and know he can get it done.”

NEXT TO GO, Luis Francisco de Azevedo of Brazil on Nashville was faster but had two rails down, then Egypt’s Nayel Nassar Igor Van De Wittemoere also had eight faults in 45.15 seconds.

Ireland's Shane Sweetnam on James Kann Cruz had the second and only other clean jump-off, but he finished in 42.25 seconds, just short of Ryan’s time, to place second place at the conclusion of the class.

Daniel Bluman on Ladriano Z had one down in 42.98 seconds with four faults to eventually place fourth.

Samuel Parot on Chrystal Blue had eight faults in 46.41 seconds, while the last to go, Evan Coluccio on Valdes Z had one down but was the fastest four faulter to place third.

“Eddie gives you a lot of confidence as a horse because he has produced so many clear rounds” said Ryan. “I always feel really good going into the ring, and we will give the World Cup Qualifying Class a shot. He has been to The World Cup Finals in Omaha, Neb., once as a 9-year-old in 2018, and he was second, so he does like indoors. He’s all around a great horse, a lifetime horse.”