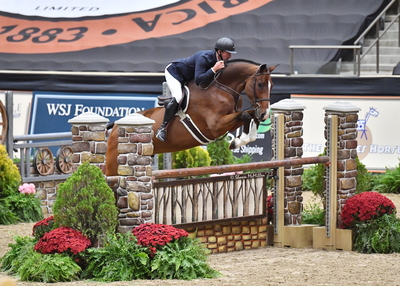 Cannon Creek ridden by Hunt Tosh (Photo by Shawn McMillen)Scott Stewart of Flemington, N.J., followed up his Leading Hunter Rider titles at Harrisburg and Washington with yet another Leading Rider title.

Cannon Creek, an 11-year-old Holsteiner gelding, is owned by the Wheeler Family, and did not score lower than 90 points over the course of two days to secure the leading position among the hunter competitors.

“Cannon Creek deserves this. He tries so hard and I give him all the credit,” said Tosh. “He went home from Harrisburg, and he hacked all week, so this is first show back. Basically, I just try to stay out of his way. He will always do his part.”

Cannon Creek and Tosh have had an incredibly successful year, winning classes in the best company, including the USHJA/Platinum Performance International Hunter Derby Championship.

MOST RECENTLY coming off of a championship in the High Performance Hunter division at the Pennsylvania National Horse Show in Harrisburg, Tosh on Cannon Creek competed in the National Horse Show for the first time during their partnership to conclude the fall season.

“We didn’t come to the National last year so this was the first year showing him here. So to come here and be champion this year is obviously great,” said Tosh. “It is such a fabulous horse show and the trophies and awards are all wonderful. It is so special to hear past horses’ names and to win awards like those.”

The final award of the professional hunter divisions was presented to Stewart.

For the 15th time in his career, Stewart was named Leading Hunter Rider at the National Horse Show.

Stewart rode multiple horses to the winner’s circle over the course of the two days of hunter competition.

Stewart's third championship came with For Always in the High Performance Conformation after winning the model and placing second in both the over fences and handy on Tuesday, followed by a third in the under saddle and a win in the stake  on Wednesday. 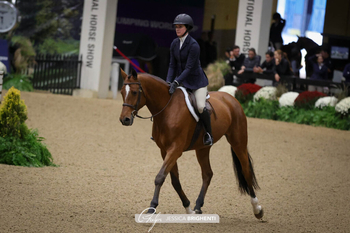 Caroline Ingalls on Concerto (Photo by Jessica Brighenti)Ingalls rode her 11-year-old Westphalian gelding to two second places Tuesday in the first round and under saddle and on Wednesday won the handy with 90 points and the stake with 89 points to secure the championship of the Amateur Owner Hunter 3’6” Under 35 on her way to the Grand Championship.

“Concerto really steps up out there,” said Ingalls . “He is almost a totally different ride indoors than he is in a show back home in California. He loves the environment here!”

“I was a little nervous coming into today” said Ingalls. “I just wanted to put in a really good ride. Concerto and I have been champion here in 2019 and 2021, so doing it three times was a really big deal. I didn’t know if I could make it happen.”

Next, Sommers on Seaside and Sommers was presented with the Amateur Owner Hunter 3’3” Grand Championship.

Sommers has a busy work schedule where she does creative marketing for Netflix.

“Honestly, I wasn’t feeling great coming into tonight’s classes in the sense that my nerves can get to me once in a while” said Sommers. “But I do have a great team behind me, and that helps me keep my nerves under control. I knew I had to be consistent in my rounds especially because I was neck-and-neck with Stephanie Danhakl and Vanessa Mazzoli, so it felt really good to put in two solid rounds.”

Sommers’ two consistent rounds, with scores of 89 points and 86 points respectively, earned her second place in both the stake and the handy to accumulate enough points to clinch the championship.