Catoki, ridden by McLain Ward, is both a Speed specialist and a Puissance winner

UPPER MARLBORO, Md.--Catoki , who is ridden by McLain Ward, had quite a night at the Washington International Horse Show on Oct. 28. 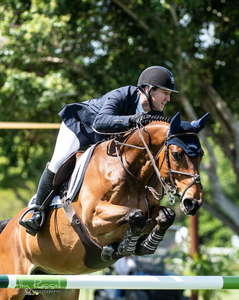 McLain Ward on Catoki (File photo)First he finished second to Calgary Tonic, ridden by Laura Kraut in the $75,000 Faults Converted, Speed Final, and then he tied for the win in the $25,000 Puissance class.

Catoki is a speed specialist for Ward, but he also has the power and nerve to jump the huge Puissance wall.

And this wasn't the first time he has completed this amazing double.

He also competed successfully in both classes at Washington last year.

In the first class of the evening, Kraut on Calgary Tonic finished in 57.13 seconds to win over Ward on Catoki, who crossed the timers in 59.4.

Shane Sweetnam on Out Of The Blue was third in 59.85, and Rodrigo Pessoa on Venice Beach was fourth in 61.42.

In the Puissance, three tied for the win.

Ward on Catoki and Irish brothers, Jordan Coyle on Eriston and Daniel Coyle on Oak Grove's Carlyle, all jumped the same height but were unable to go higher and so tied for the win.

Devin Ryan on Hangover was fourth.