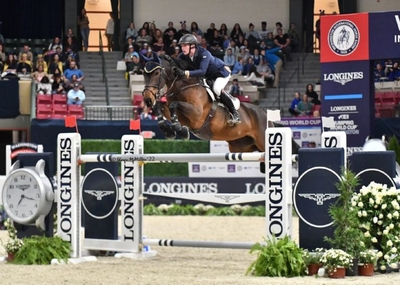 Daniel Coyle on Legacy (Photo by Shawn McMillen)“The first class is usually a smaller class, which makes it a little easier for everybody to get introduced to the ring and the crowd, obviously,” said Coyle, referring to the size of the fences. “Sometimes it can be daunting going straight into a big class like that, but it worked out for me tonight.”

There were 28 starters from10 countries, and nine were clean over Bernardo Cabral’s first round track to advance to the jump-off.

Katie Dinan was the first double clear on Atika des Hauts Vents in 30.80 seconds., but next in the ring, Coyle shaved more than three seconds off the time, blazing through the timers in 27.42 seconds.

Hunter Holloway on Pepita con Spita was clean in 30.32 seconds, but in the end it was Coyle and Legacy who finished on top with Holloway second,and Dinan third.

“Actually, the jump-off was only six fences, and an indoor arena is usually quite short,” said Coyle. “I would say probably the turn back to the double combination and the second to last fence is where it came up good for me.” 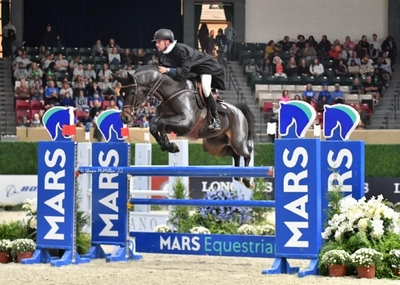 Daniel Bluman on Ubiluc (Photo by Shawn McMillen)She was purchased with major championship classes in mind, and she’s lived up to those expectations, debuting at the European Championships with a top 10 finish and also selected for this year’s World Championships.

“She’s been incredible to me,” said Coyle. “She knows the ropes now, and we’ve sort of gelled together over the last four years, and hopefully we continue to. She’s funny because she’s always trying so hard. At a new place sometimes you’re not sure how much effort she’s going to put in. Her main thing is she doesn’t want to knock the jumps down.”

“She’s very opinionated,” said Coyle. “My groom, Greg, gets on great with her. Sometimes he’ll leave food sitting where he’s tacking her up, and she’ll take it. She kind of gets away with everything because she wins a lot and she’s a fantastic horse, and nobody ever wants to tell her anything. It’s great because I only need her for an hour a day, so whatever she does in her own time, that’s up to her.”

Bluman on Ubiluc won the $36,600 International Jumper Accumulator class, where riders earn points for each clear fence they jump in the course plus an additional 20 points for the final fence.

Bluman and Ubiluc finished with a perfect score of 65 in a lightning-fast time of 41.58 seconds.

Though Ubiluc was dressed to kill from the start, Bluman needed a little extra push before the course walk to get into character.

“I was going to dress as an Hermés rider, which is normally how I dress every time I compete, and I’m very proud to wear that,” said Bluman. “I felt like I was out of place before the class when we were going to walk the class, so Baylee McKeever very kindly gave me this priest outfit to wear in tonight’s class.”

“My strategy was to try and turn as tight as I could all over the place and do the leave-outs in the lines," said Bluman. “Ubiluc felt really good, and he was responsive from the get-go. I felt like he was looking for the jumps and felt great. The time held up all the way, so I’m very happy with the result.

“Ubiluc is a pretty easy ride, I would have to say,”said Bluman. “He has personality, and he plays. He’s not a very big horse, so he has to have some personality in order to perform. Today the distances showed up out of the turn, so I didn’t have to pull. I was just going forward the entire way. That’s the name of the game, and it worked out for me tonight.”

Bluman hasn't competed in Washington since he rode in the Children’s Jumper Finals at the Capital Challenge Horse Show in 2001.

“It’s been a long time since I’ve been here,” said Bluman. “We’re very happy to have the Washington International Horse Show here. The horses are happy. The ring seems to be in good condition. We have the possibility to attract the best riders in North America and Europe. It’s great, and we have great sport.”

“We always really like when the crowd comes and enjoys the event,” said Bluman. “It’s fun for us. Not that many years ago, I was one of them in the crowd, cheering and watching for the riders that I liked. It’s really cool, and I honestly really like it. It’s good that all the kids were here and made the time to come. They have school tomorrow and still they’re here and supporting until the late hours of the night. We’re very grateful that they show up.”

The best costume award went to the Mother of Dragons, Grace “Khaleesi” Debney of Great Britain and her fearless dragon, Zarina du Vidau.